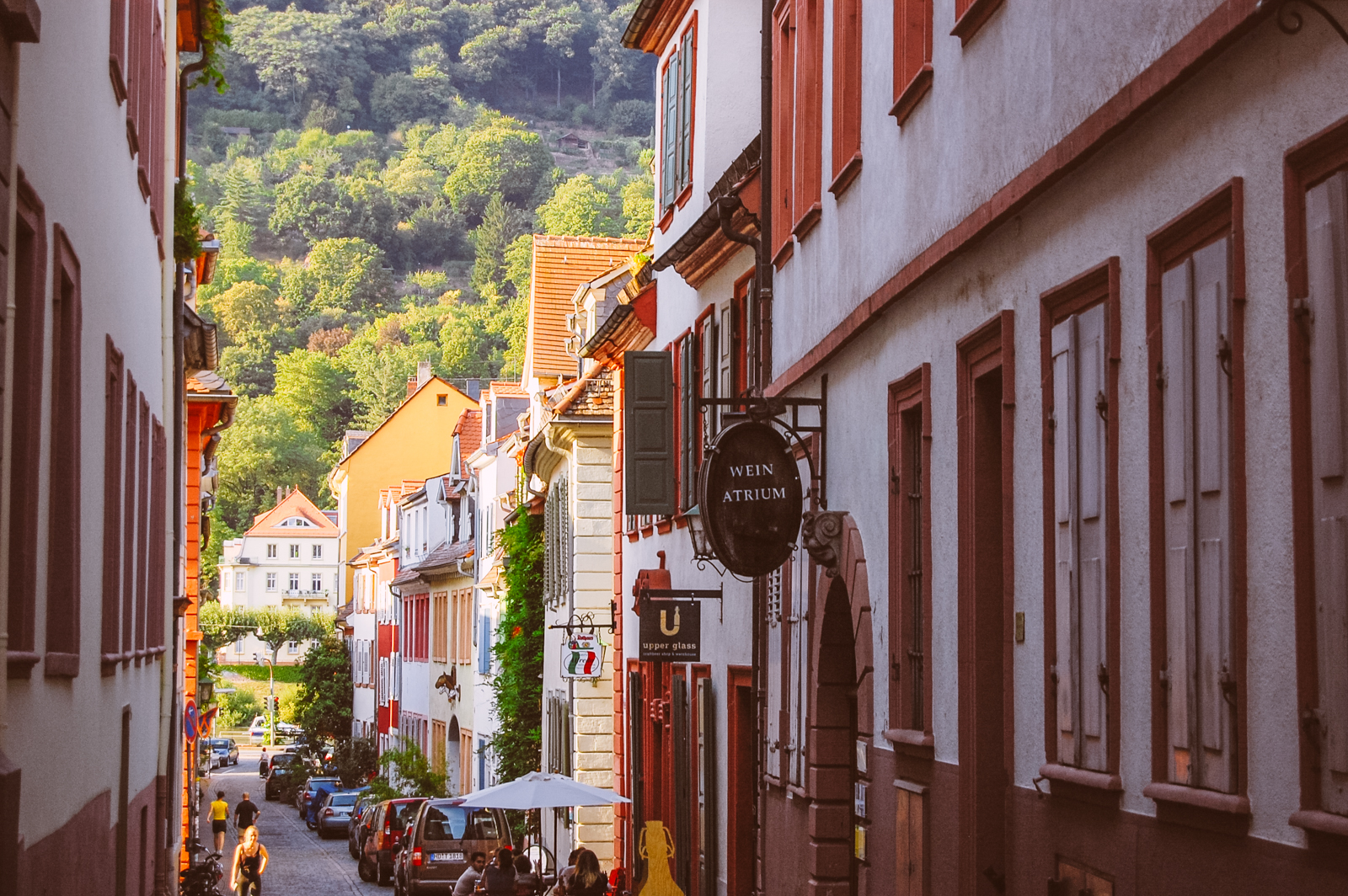 Everything here seemed awash with golden light, probably because of the frequent use of red and orange tones in the architecture. Both the main cathedral and castle in the hills are fabricated out of red sandstone. 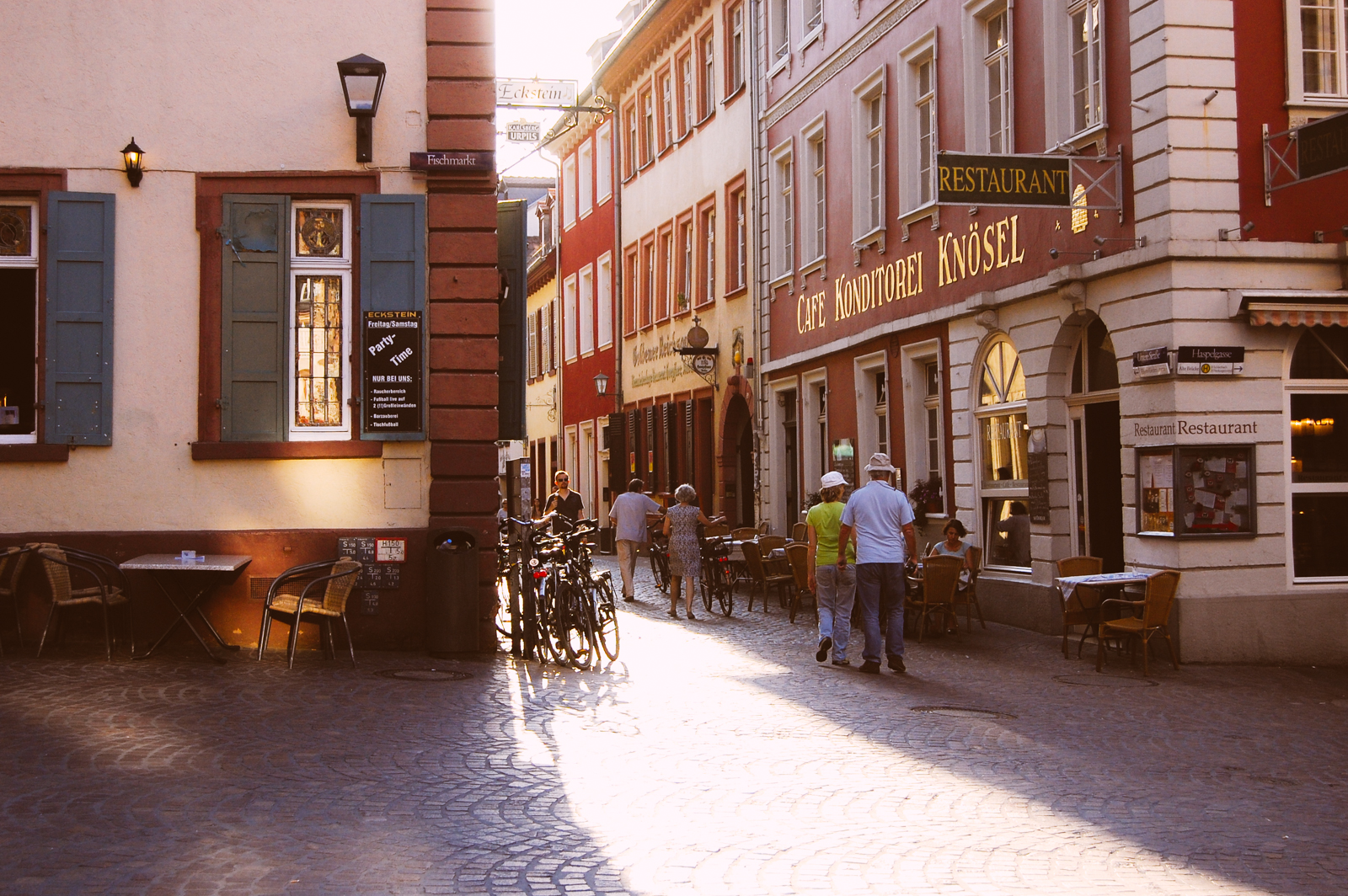 I found it so charmingly funny how minuscule shops were squeezed into the empty spaces between support pillars of the cathedral. I suppose that’s one way to use space efficiently! Perhaps it’s also a reflection of how integral the church once was in the lives of the citizens here, so integral that the city literally clung to it like roots in the earth. 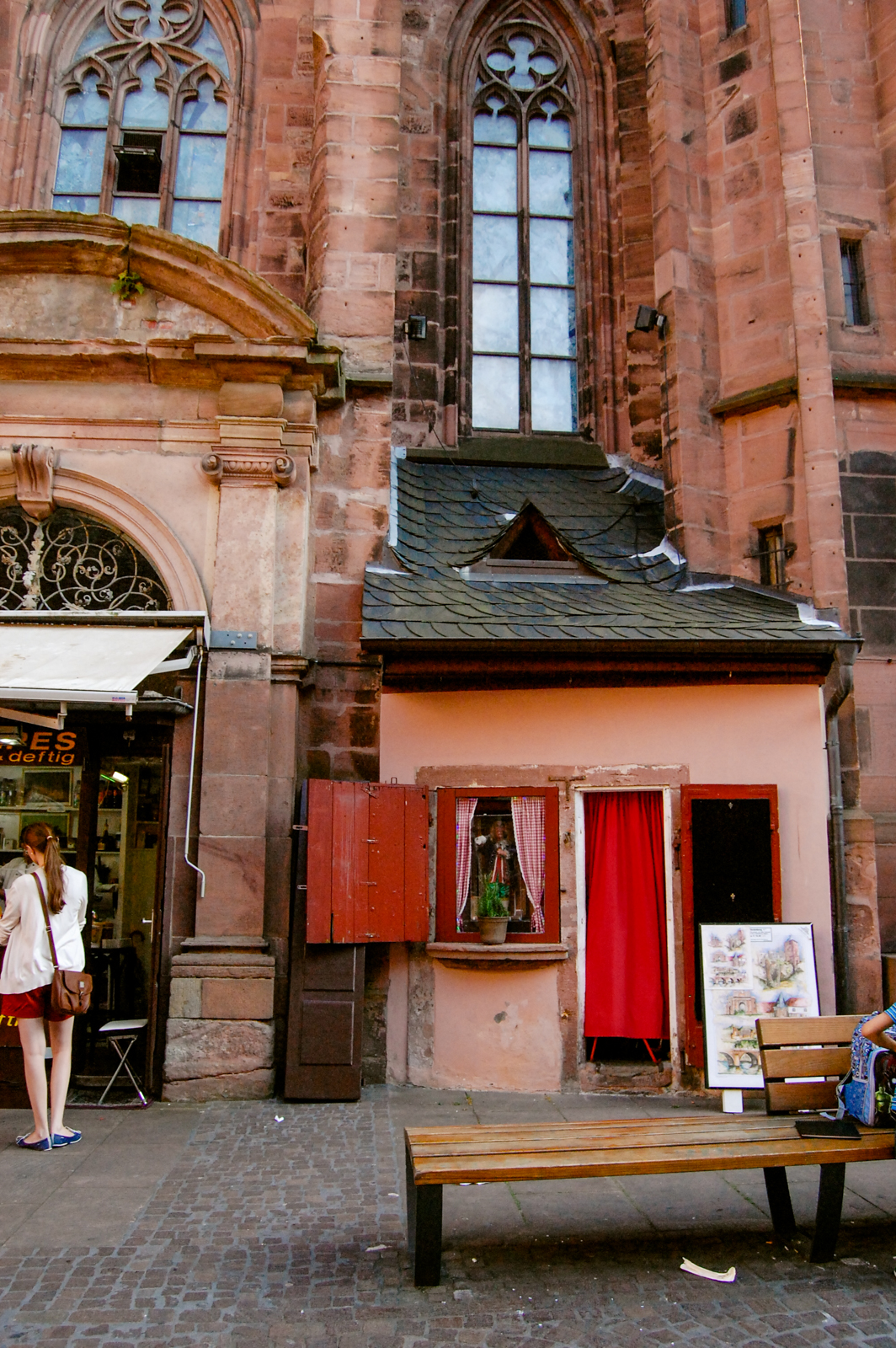 I had the pleasure of visiting one of the most adorable shops EVER here in Heidelberg. It was filled to the brim with handmade christmas ornaments and incredible Cuckoo clocks. Unfortunately I didn’t take any nice pictures inside, but trust me, you’ll want to stop in here if you ever come to Heidelberg: Käthe Wohlfahrt.

What I’ll remember the most about visiting this region of Germany is the storybook charm. Rows of pastel colored buildings, overflowing window boxes of pink flowers, perfect rows of tables with the sounds of children laughing, and to top it all off, a massive red castle nestled in the mountains above the town. 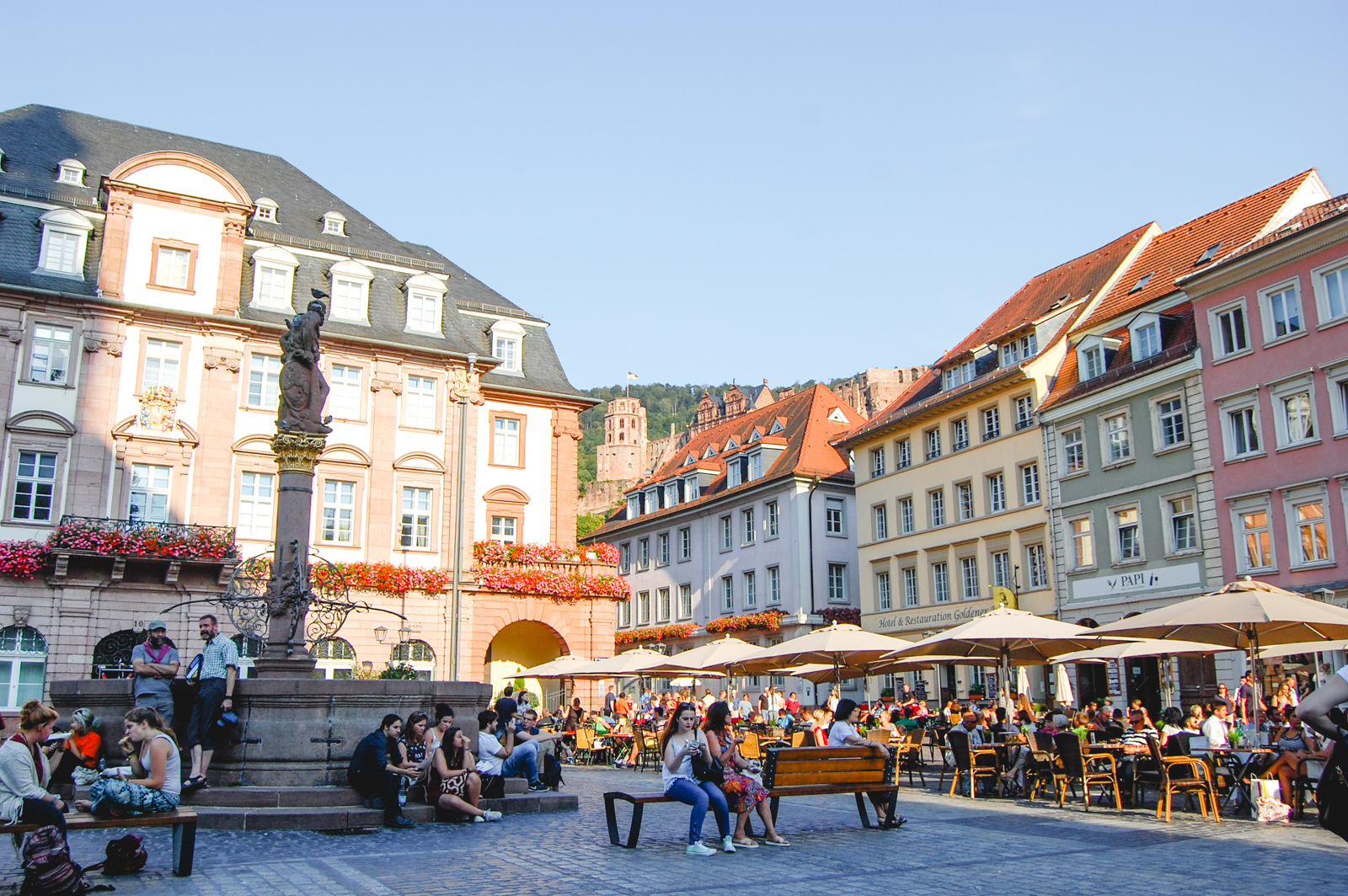 Seriously, Heidelberg castle followed us everywhere we went. Perched above the town like an overprotective parent, you can’t avoid it, its reddish-pink color standing out even more because of it’s contrasting green backdrop. 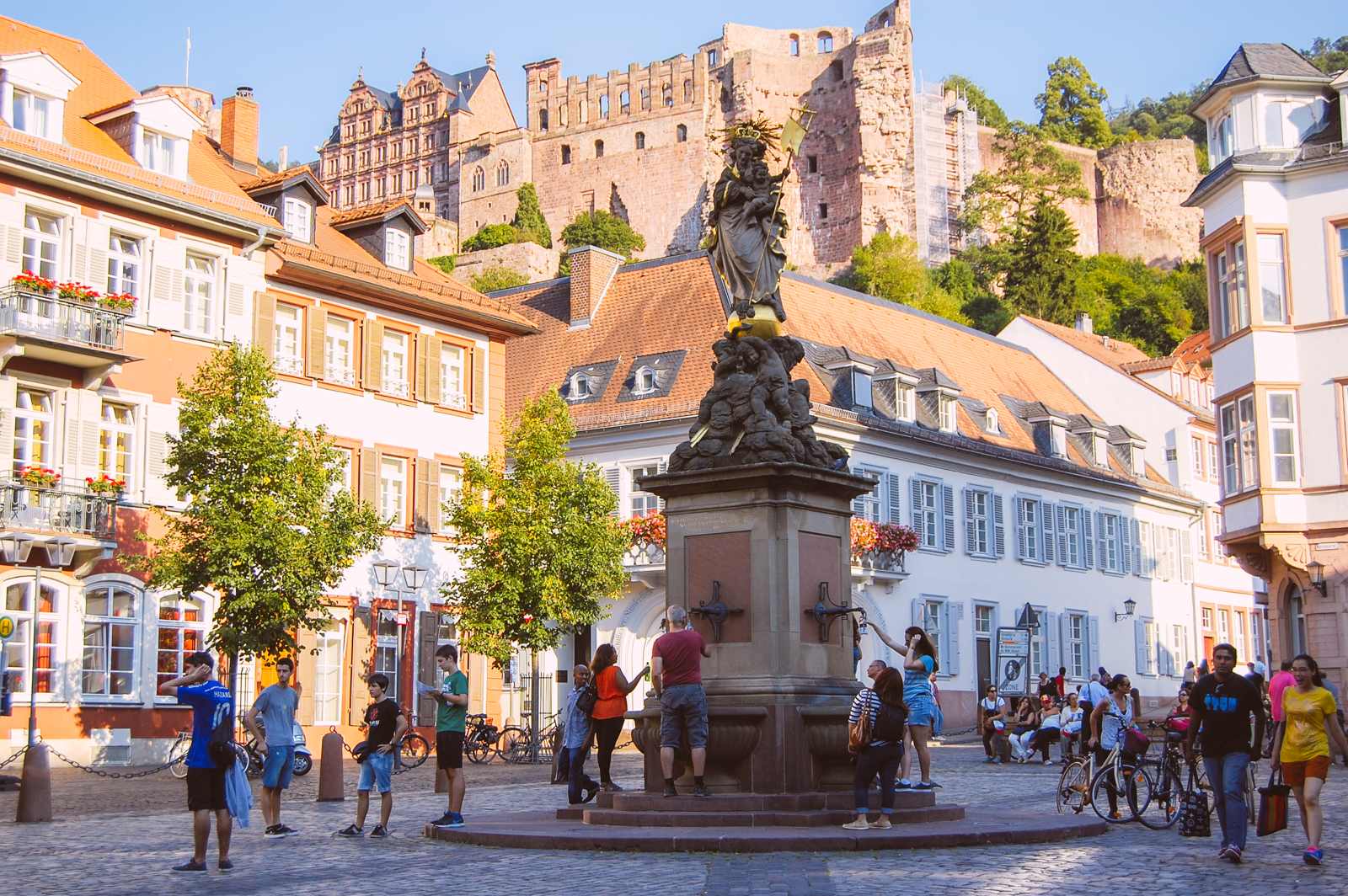 Instead of taking the funicular up the mountain, we took a hike, which I actually prefer because once you arrive at the top you feel so much more accomplished. We also were able to stop along the way to admire the views, like the one below, taken looking out of an old stone window. 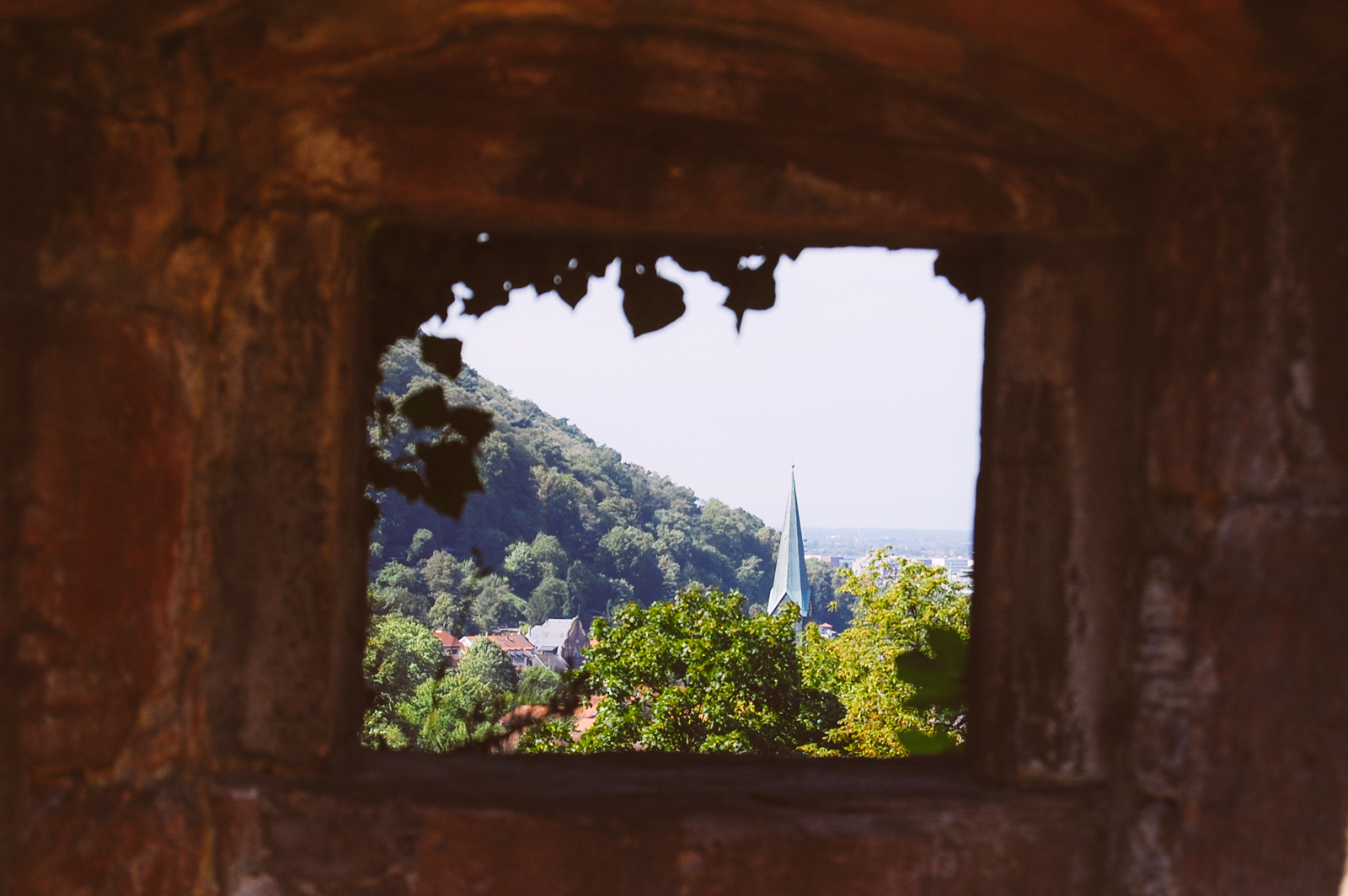 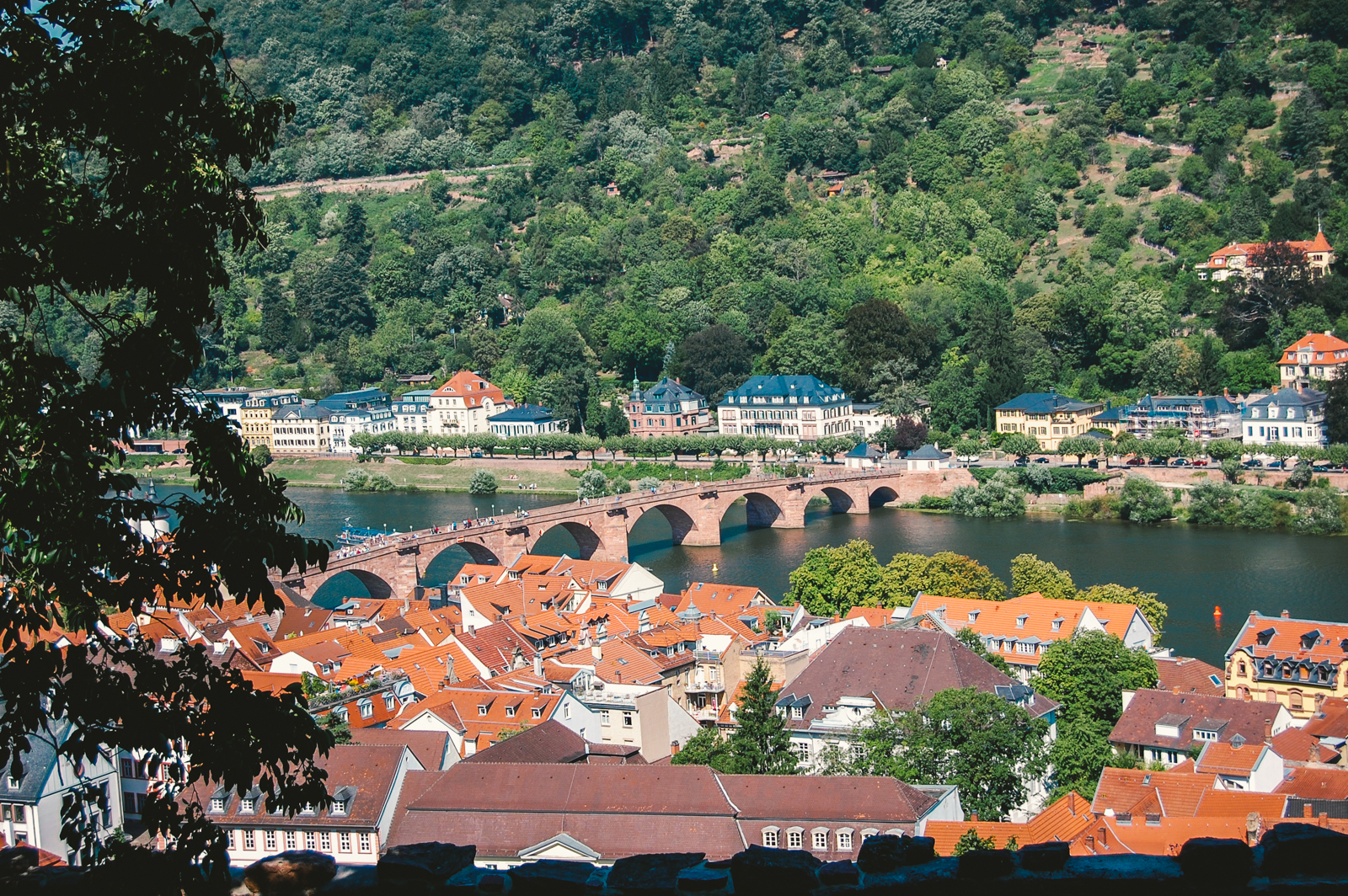 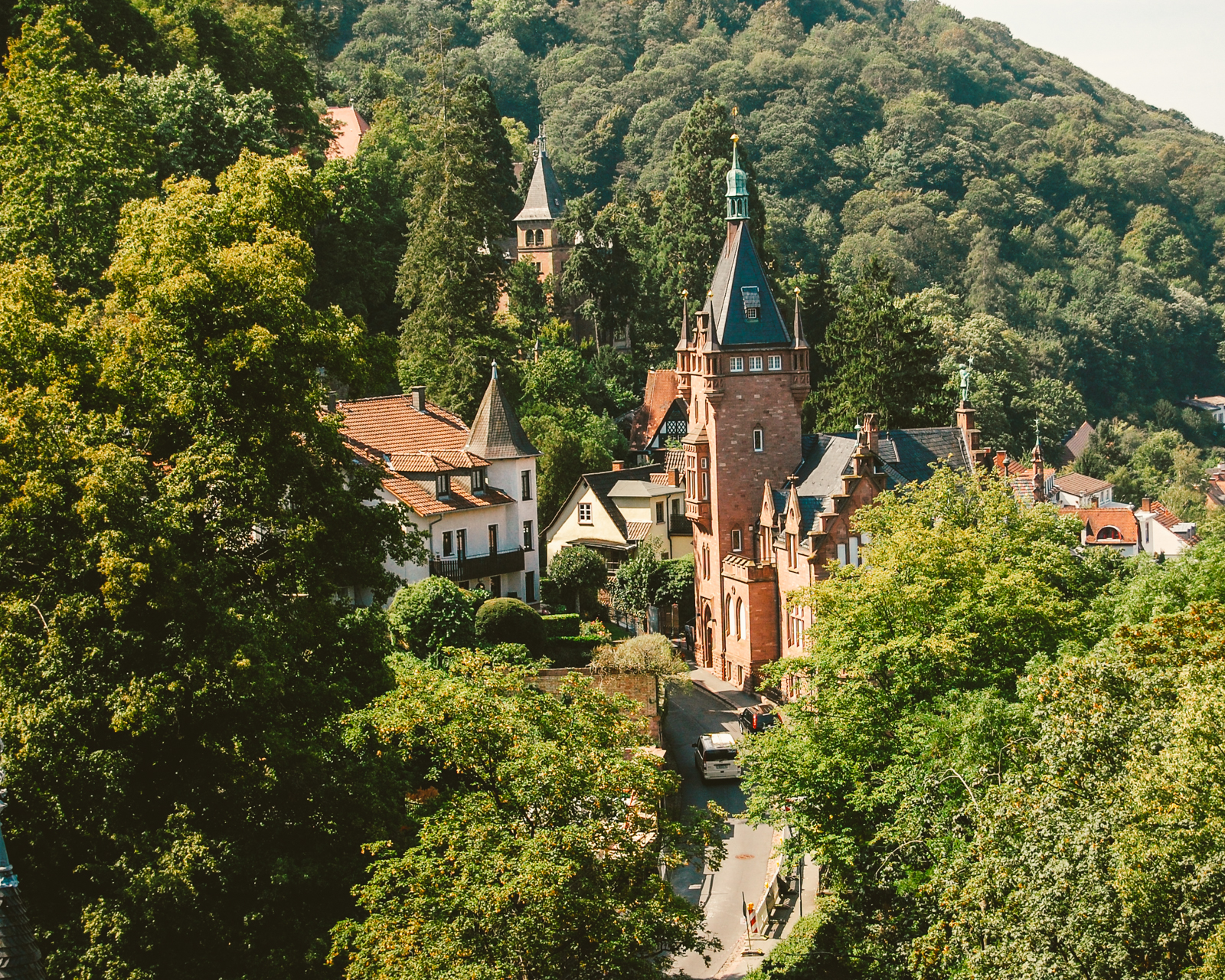 One wall of the castle complex had no building behind it, just an empty facade. Instead, you could see the sky through each window opening. It reminded me of an ancient lost civilization of another world, even though it was only around 500 years old. I couldn’t help but think of the city of Charn in The Magician’s Nephew, the first book in C.S. Lewis’ Chronicles of Narnia. Heidelberg castle felt a bit like Charn, but much less evil of course.

In fact, Heidelberg Castle has made an impression on art and literature. It became beloved during a brief moment during the Romantic movement for its sweeping views over the river and its beautiful ruined state. The Romantics of the 19th century LOVED old ruins and mythical pasts. The painter J.M.W. Turner spent time in Heidelberg to sketch and paint the castle, and Victor Hugo wrote of the castle’s history. 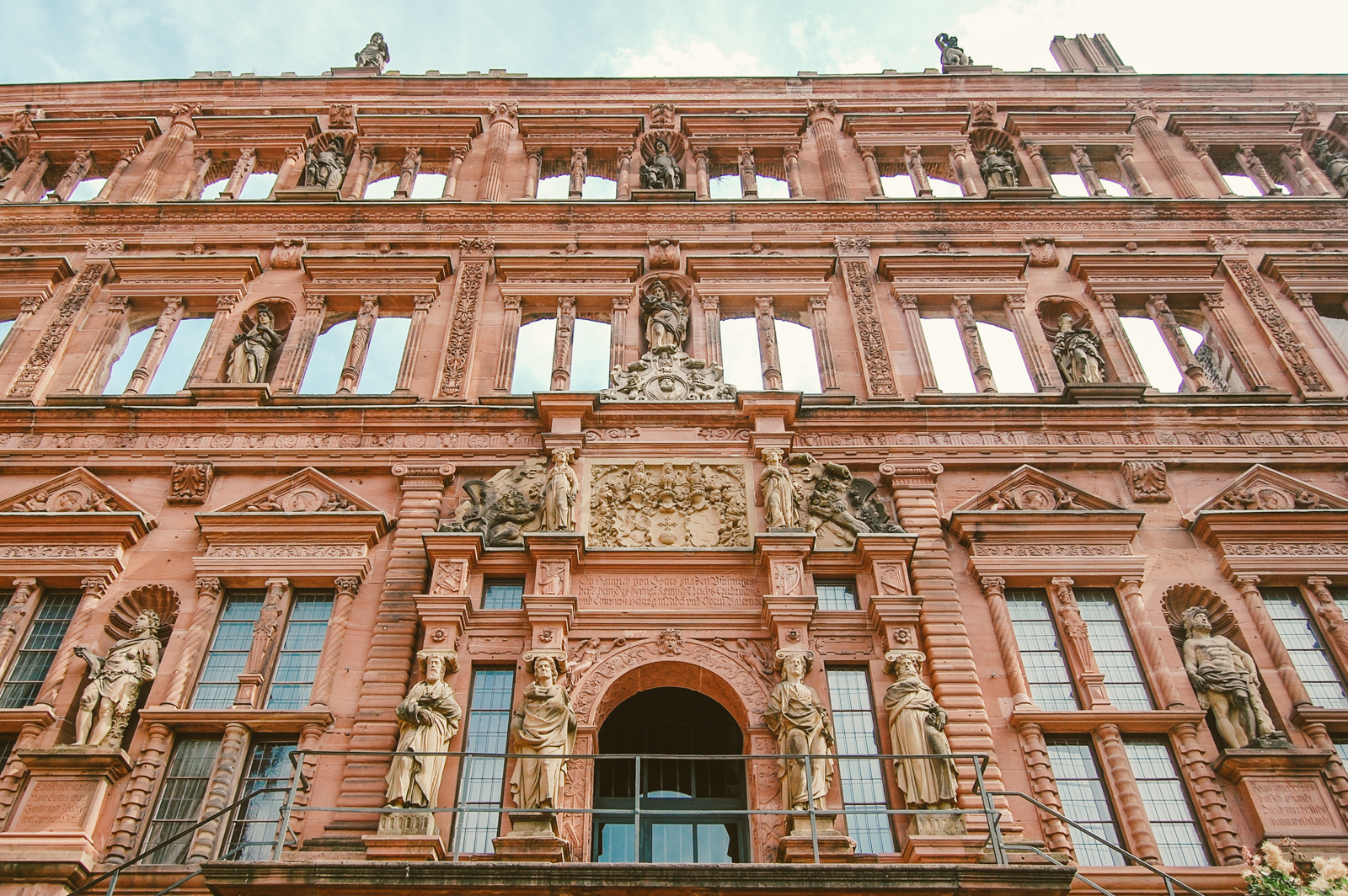 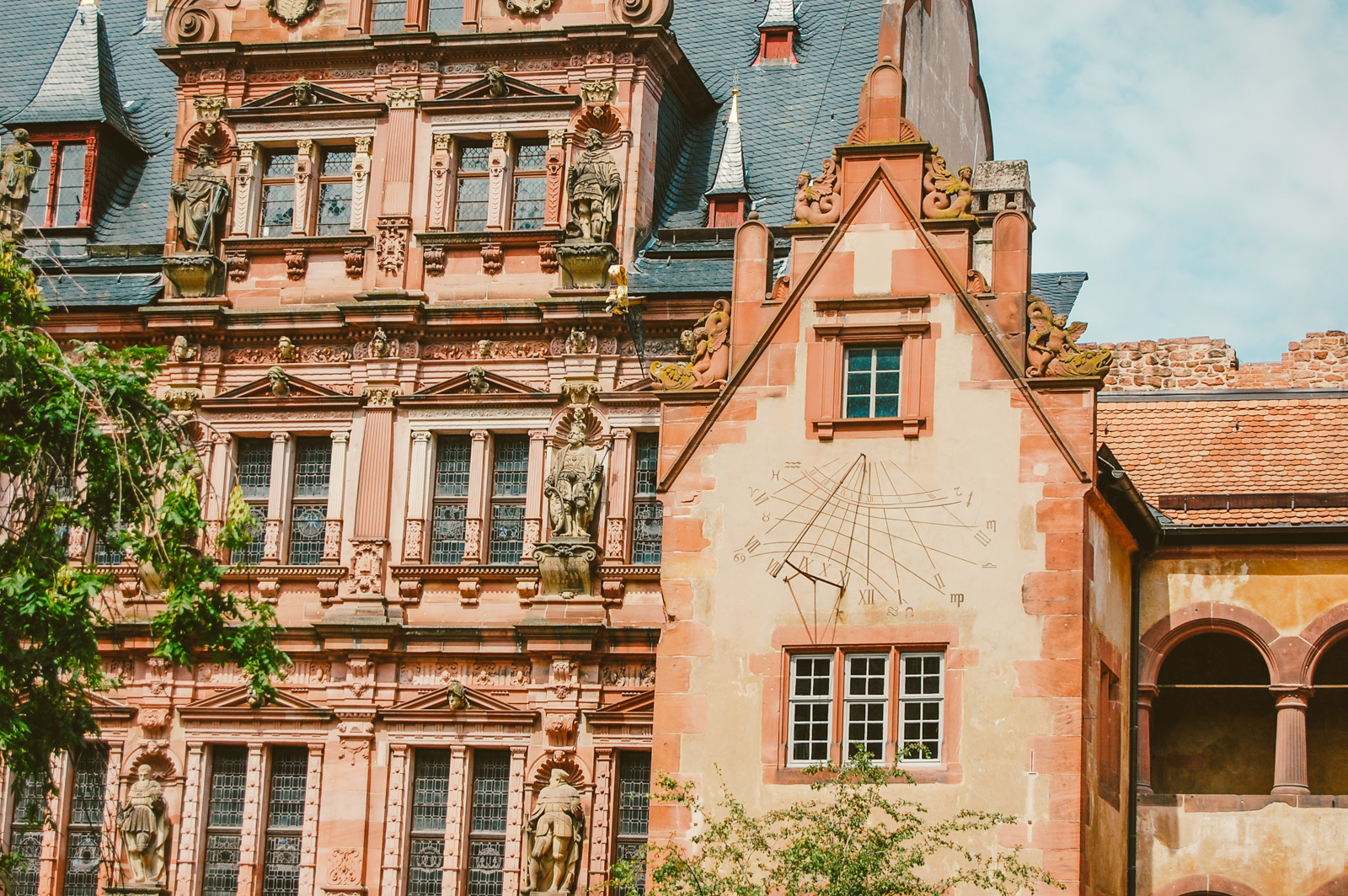 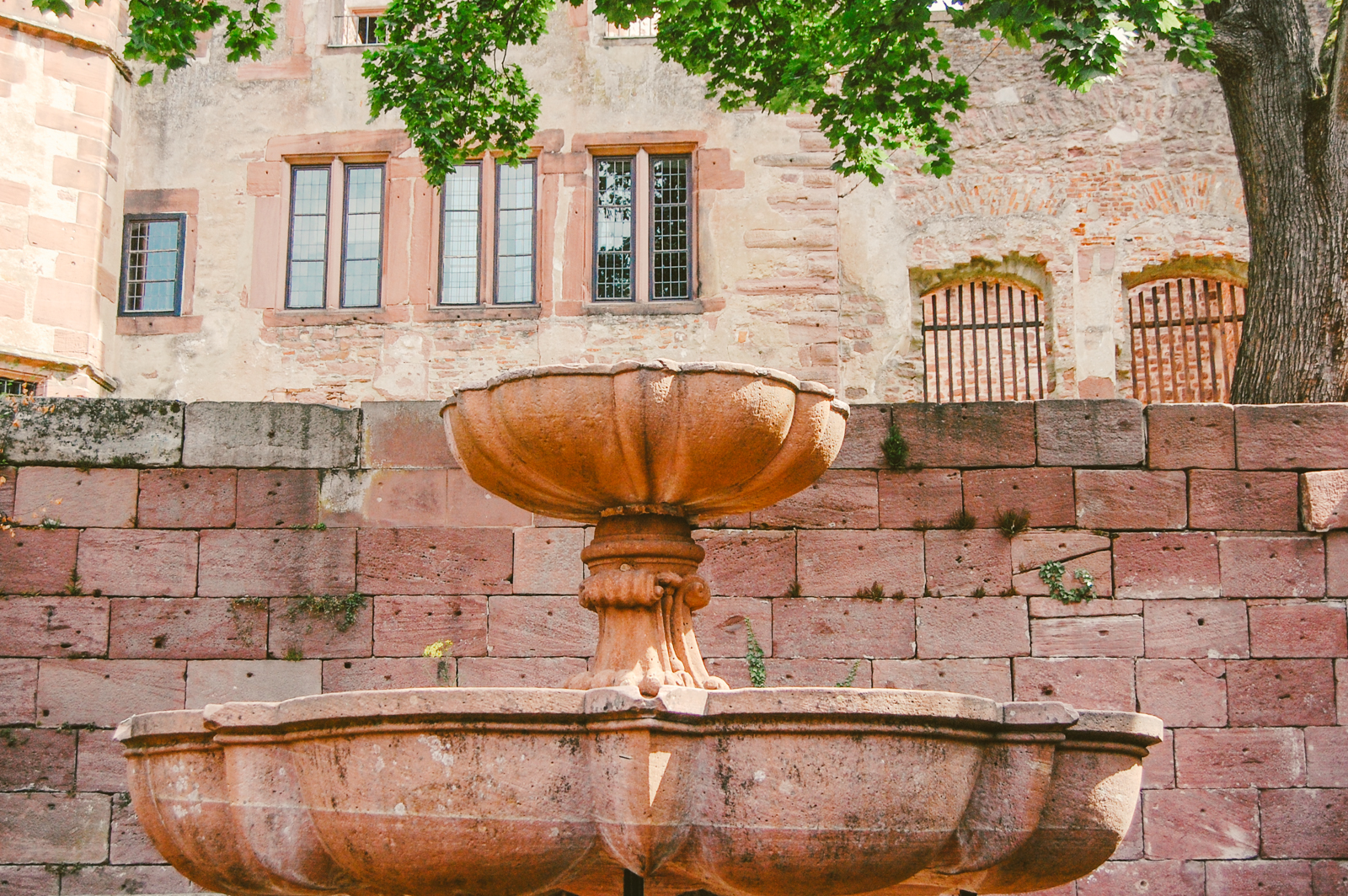 Mark Twain even wrote about the castle in his travel book A Tramp Abroad:

A ruin must be rightly situated, to be effective. This one could not have been better placed. It stands upon a commanding elevation, it is buried in green woods, there is no level ground about it, but, on the contrary, there are wooded terraces upon terraces, and one looks down through shining leaves into profound chasms and abysses where twilight reigns and the sun cannot intrude. Nature knows how to garnish a ruin to get the best effect. One of these old towers is split down the middle, and one half has tumbled aside. It tumbled in such a way as to establish itself in a picturesque attitude. Then all it lacked was a fitting drapery, and Nature has furnished that; she has robed the rugged mass in flowers and verdure, and made it a charm to the eye. The standing half exposes its arched and cavernous rooms to you, like open, toothless mouths; there, too, the vines and flowers have done their work of grace. The rear portion of the tower has not been neglected, either, but is clothed with a clinging garment of polished ivy which hides the wounds and stains of time. Even the top is not left bare, but is crowned with a flourishing group of trees & shrubs. Misfortune has done for this old tower what it has done for the human character sometimes – improved it. 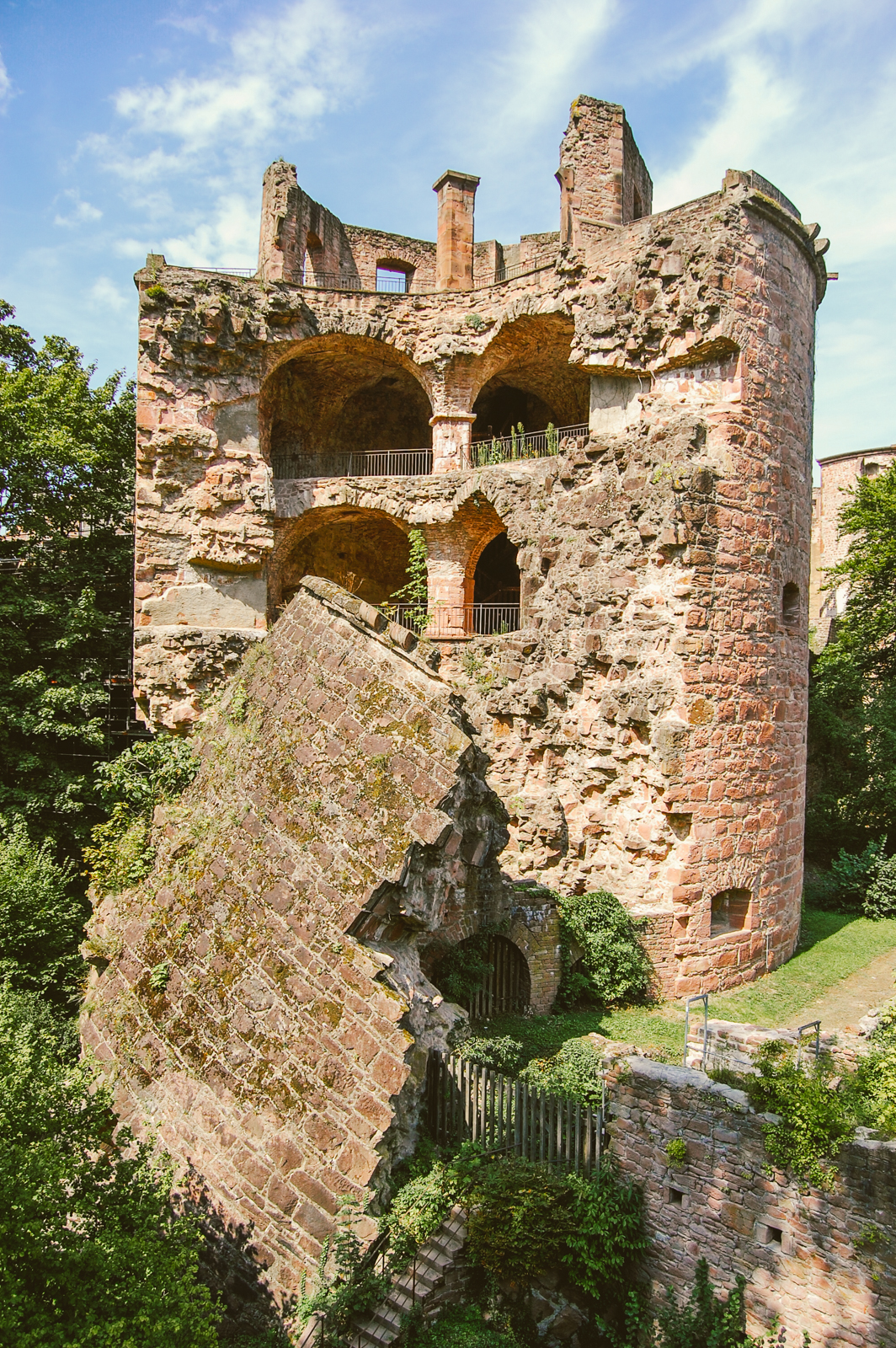 I used to disinterested in history until I realized that history is made by real, living people. The more I learn and the more I explore, the more I realize that the people of 500 years ago really aren’t so different from us. Yes, they had different customs and world views, but you could easily say the same of someone living in a remote village in the rainforest. The way people live is different, but our humanity ties us all together.

I often find that humans have always been preoccupied with a few things: sex, love, power… and alcohol. In fact, one of Heidelberg Castle’s claims to fame is its giant wine barrel. Once holding 130,000 liters of wine, it is larger than the two-level studio apartment I currently live in! 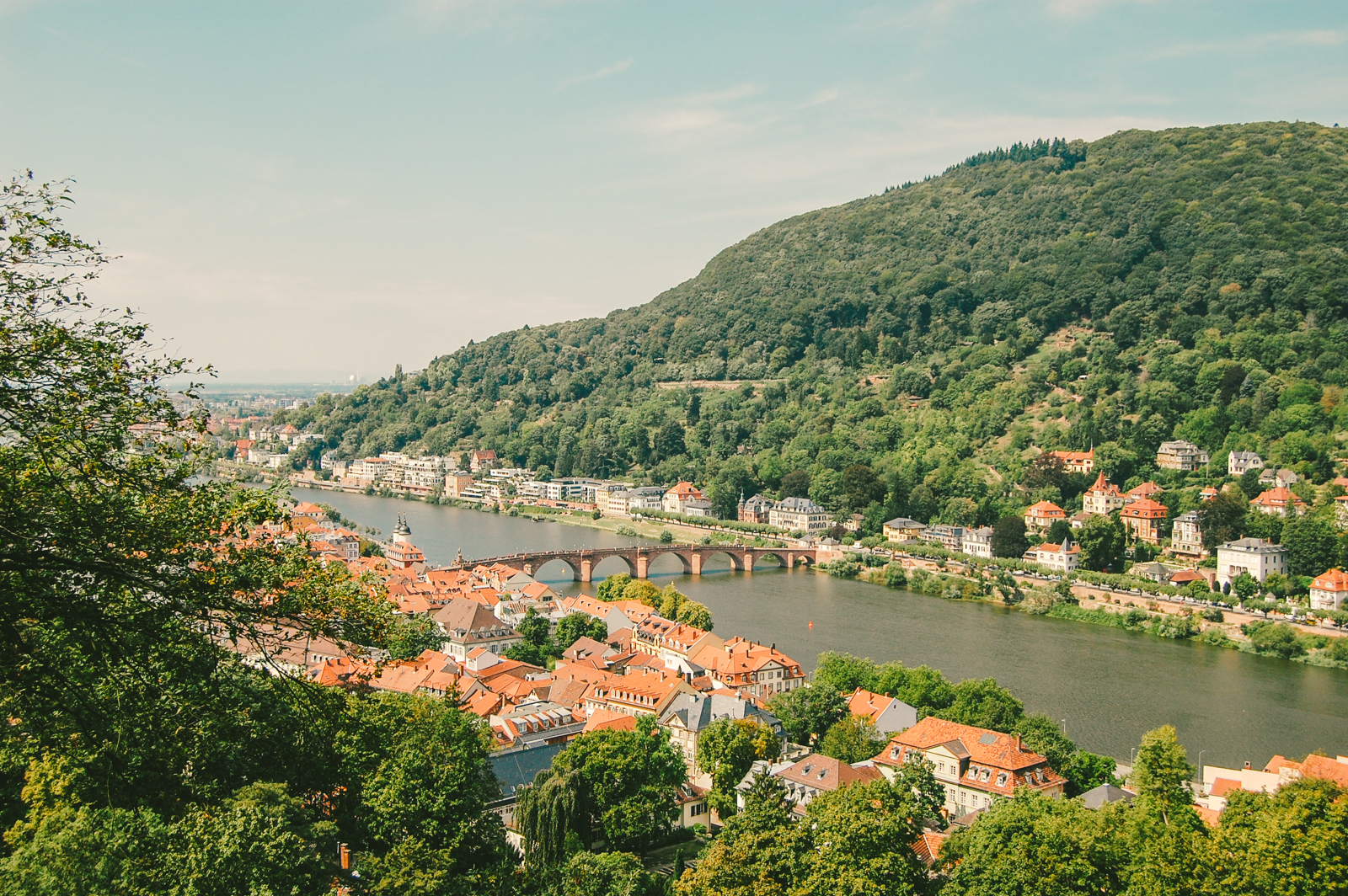 Other than the castle, it was here in Heidelberg that I experienced my first official wiener schnitzel, and no I’m not talking about the terrible American fast food chain. Fun fact: I once worked at said fast food chain and it was absolutely horrible… but the point is, I had always assumed that the term “Wienerschnitzel” meant some kind of sausage or hot dog. It wasn’t until I met a German friend here in France that I discovered how wrong I had been.

I ended up ordering a variation made from chicken and slathered in gravy. It was quite good! Very heavy, but local and new to me, which are two characteristics I always strive for when looking for food in a new country.

For more on Germany, see my blog post about Freiburg.