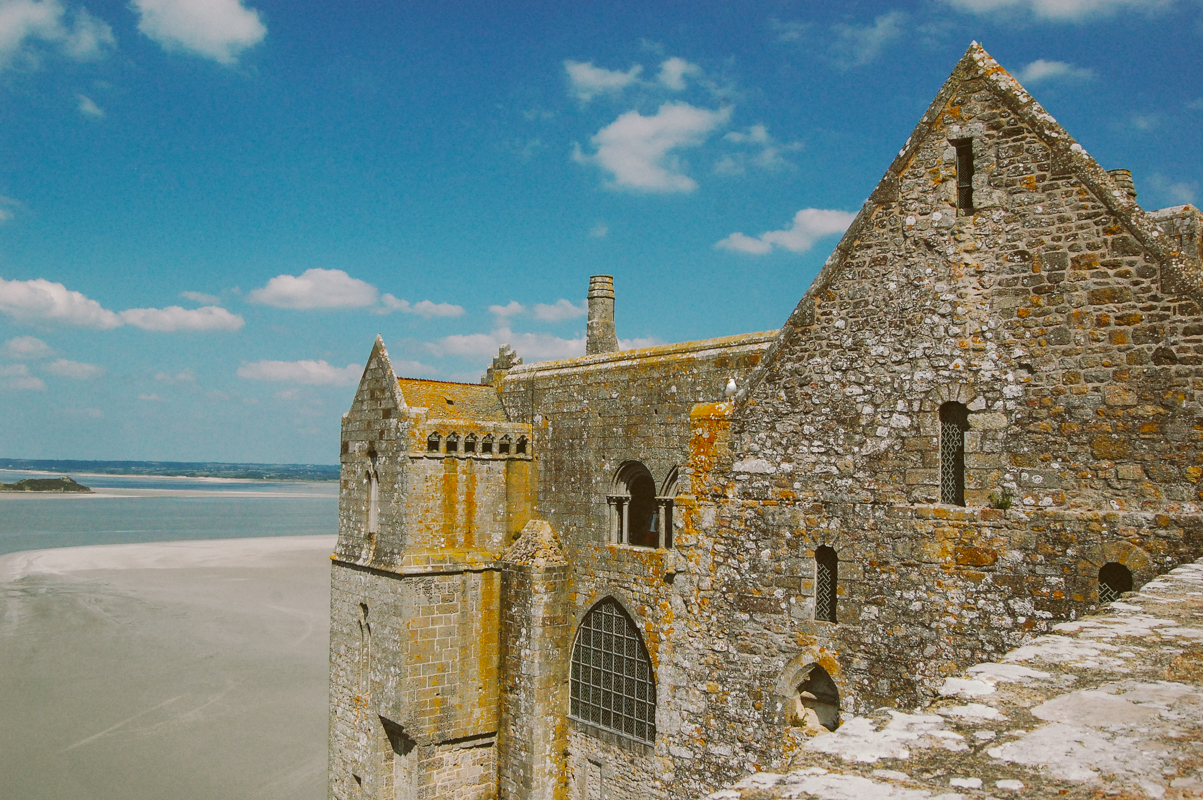 My best friend Natalie and I decided to take a quick 4-day road trip through France, more specifically, Normandy.  What follows is an account of the events, sights, and stories that took place.  This is the final instalment – you can see day 1 HERE and day 2 HERE.

After waking up in our cute and comfortable Airbnb room, we decided we couldn’t leave Bayeux without seeing the famous Bayeux tapestry, which is recognized as an official piece of world heritage by UNESCO, and for good reason.  It’s a major source of historical, cultural, and artistic information.  I strongly recommend following the free audio guide because it guides you through the crazy (and sometimes funny) story being depicted.  I usually bypass the audio guides at museums, but this one was truly entertaining, and essential in my opinion.

Next, we hopped in our car, and headed toward MONT SAINT MICHEL!  After getting lost, of course.  My favourite part of the drive was seeing little glimpses of the mont from a distance.  The land leading up to the fortress is mostly flat grassy land, so the Mont really stands out on the horizon.  It was incredible, really.  The closer we got, the more it made me feel like I was headed towards Hogwarts!  Too bad I didn’t get sorted into a house upon arrival… (I was hoping for Gryffindor).  I wouldn’t be surprised if Hogwarts was inspired by the Mont. If you don’t know anything about Mont Saint Michel, let me give you the briefest outline.  The first monastic construction happened in the 8th century, after which various additions, rebuildings, and repurposing took place.  It changed hands multiple times, probably for its strategic location, and is even depicted on the Bayeux tapestry.  For much of its life, it was religious in function, but also served as a high-security prison.  Today, as another UNESCO World Heritage site, it welcomes hoards of tourists each year, while still retaining a religious function.  It’s pretty crazy that within one day, Natalie and I saw two UNESCO sites! The Mount is essentially an island, but the tide was low when we arrived.  The tide here is the most extreme in Europe, rising and falling about 50 feet (15 meters).  In the spring, at low tide, the sea can be as much as 9 whole miles from the actual shoreline!  When we were there, the land immediately surrounding the mount was dry.  It is also extremely dangerous to walk unguided around the mont, as many people have perished due to the tides and muddy land. At the base of the Mount is a winding road filled with tourist shops, restaurants, and a few hotels.  All the roads are tiny, twisting and turning, all at an incline.  This place definitely calls for comfortable shoes – it was more of a hike than a walk!  We pretty  much bypassed most of the commercial area, since it felt a little too inauthentic for our tastes – although I must concede that many of the store signs were made to appear aged and authentic. I prefer photos over physical souvenirs anyway.

Just a bit further up, you can explore smaller, quieter passageways.  There is no way of measuring levels, because every single pathway is at a different height. All the steps are uneven, walls jut out unexpectedly, stairs looks as if they lead nowhere – it’s a fantastic maze! I love the way the rooftops look, all overlapping in a beautifully asymmetrical pattern. I really had no concept of how I arrived at the top… suddenly, I was just there. 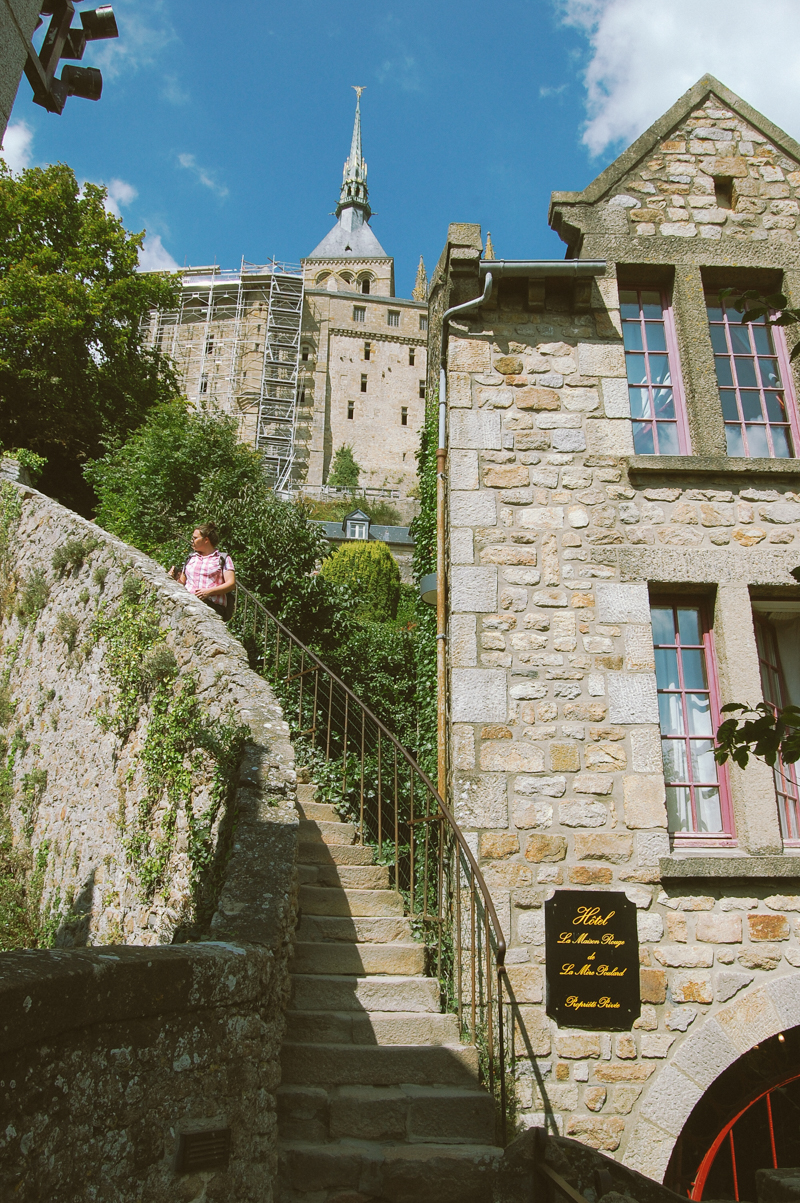 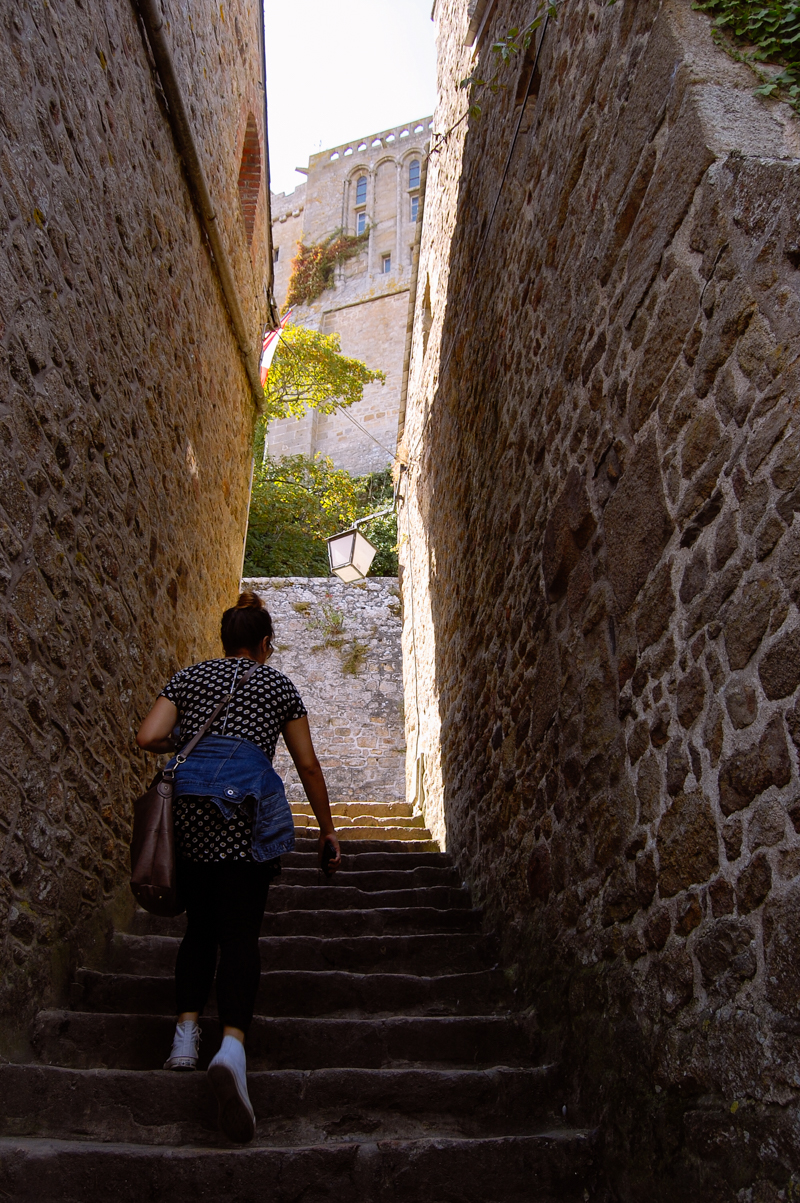 After passing by multiple look-out points, a tiny cemetery, and climbing tons of stairs, we made it it to the abbey.  That doesn’t mean the climbing stopped, however!  We still had a long way to climb. There was a huge, open terrace at the front of the main church.  Our host for the night later told us that it’s a fantastic place to watch the sunset, the golden light shining off the flat, empty land and water, onto the facade of the abbey.  I didn’t realize you could enter the Mont in the evening, but apparently you can!  (just not within the abbey itself).  I loved the contrast between rough, warm-toned stone next to smooth sand and blue sky. The cloisters were probably the most aesthetically beautiful part of the Mount.  Everything else was either monumental, rustic, or cute.  I can see why such symmetry fits well into a religious setting – it creates a feeling of calm and focus. The tour through the abbey led us around in circles on various levels.  I could tell that the lower levels of the structure were older, probably Roman in origin. All throughout were windows in lovely blue hues.  Most of the rooms were quite empty, but all of them had their own architectural character.  Some rooms were more elegant and gothic in nature, while others were heavier and rougher.  Climbing back down took a lot less time than climbing up!  We were sad to leave, and kept looking back over our shoulders at the amazing structure. After exploring for hours, we were looking forward to relaxing at the Bed and Breakfast we had booked.  Once again, we got lost on the little, largely unmarked roads of the rural area.  We had to call our hostess for directions, who had a kettle of hot English tea ready for us upon arrival!  It was like being welcomed into a home, which is so lovely after constant travelling.  Below is the view from our charming room! It looked down into a garden and was entirely free of noise pollution, being so far from a city.  I’m going to recommend staying with Jane at her amazing little Bed and Breakfast, she was truly a delight.  Here is the link to her Airbnb profile. For dinner, we really wanted something cheap, easy, and close.  Jane told us to head up the road to a little pub owned by her friend, a charming older British man.  For a grand total of 12 euros, we feasted on cheeseburgers, fries, and two glasses of cider… TEN EUROS!!!!  Do you know how shocked I was to see how low the prices were?!  In Paris, for the same thing, I would have paid at least 12 for the burgers alone, not to mention another 5 for one glass of cider! It was most certainly not the most beautiful, sparkly, or fancy place I’ve ever eaten – in fact, it was quite a hole in the wall – but it was exactly what we needed after exploring nonstop.  We were probably a little delirious, because we had some hilarious conversation with the proprietor, who greatly enjoyed teasing us for being American (how I practically used up the entire ketchup bottle). I almost had a laugh attack while scarfing down fries.  It’s funny how the most unexpected moments end up being the most memorable.  I’ll always smile remembering the cheesy 90’s music videos playing on the crappy TV, the stained carpet that smelled of cigarette smoke, and the hysterical jokes we made about pig intestine sausage.  Probably one of the best moments of the trip, if I’m being honest.  Who would’ve known?!

That concludes our road trip!  Just like I was sad when it ended, I’m kinda sad I don’t get to write about it anymore.  The next day, we simply drove back to Versailles, making a very quick stop to see Chartres Cathedral. I am so glad I went to the effort of planning this road trip, even though it had its fair share of difficulties. I hope you all enjoyed reading about it!