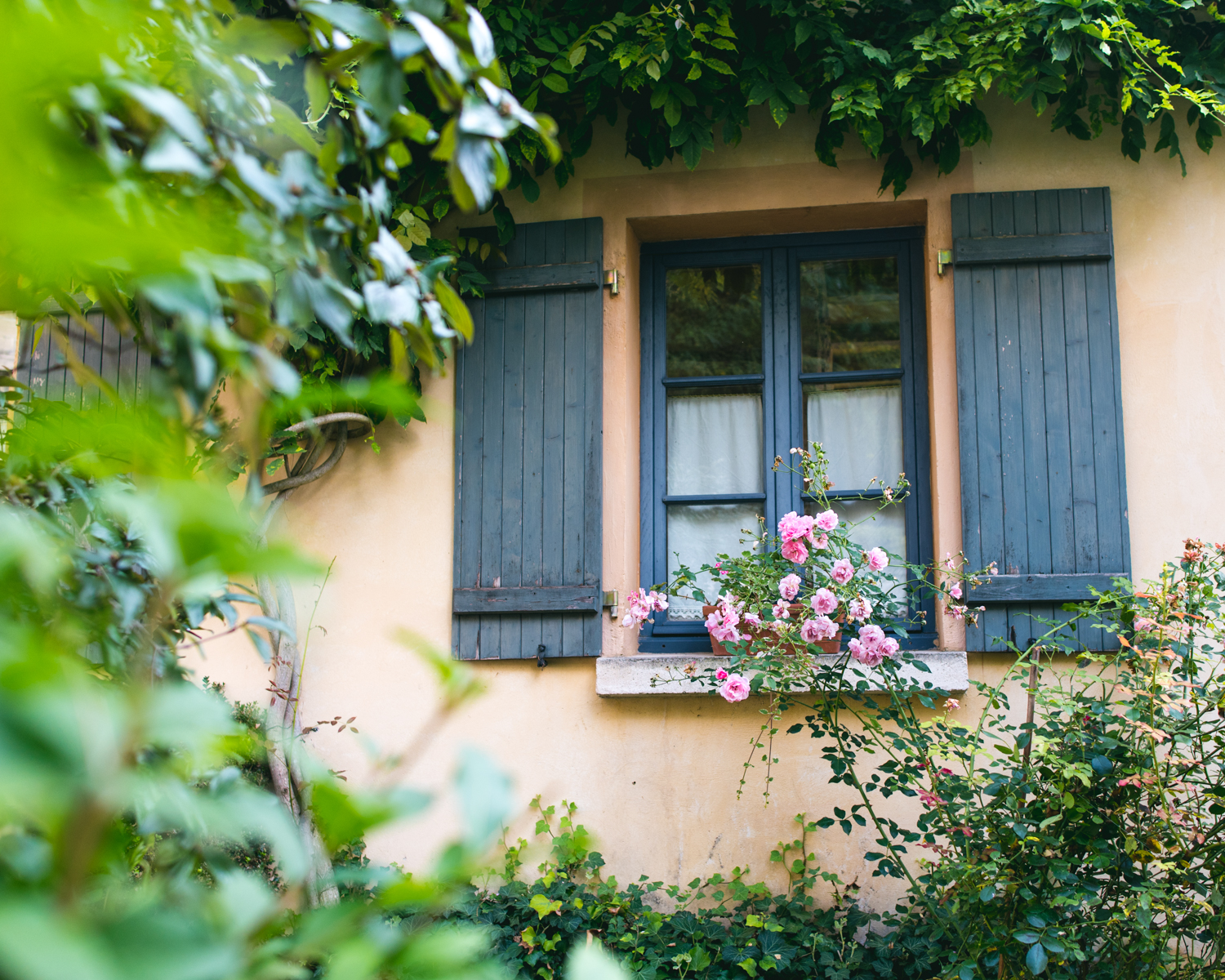 I didn’t really know what to expect from the little village of Auvers-sur-Oise, but I did know it had something to do with Van Gogh. I thought that perhaps there would be a statue or plaque commemorating his life, but there was actually so many things to see and do. The entire day trip ended up being much more emotional and touching than I ever would have expected.

Auvers-sur-Oise is where Van Gogh died, and it’s saturated with his memory. The inn where he rented a room, the fields and village streets that he painted, his friend and physician’s home (Doctor Gachet), and even his tombstone can all be visited. We didn’t have time for everything, but standing in some of the same exact same places where Van Gogh spent his last few days on earth really brought his story to life for me. I studied Art History, so I’ve read about Van Gogh countless times, but after the 50th time, it starts to feel like fiction. After visiting Auvers-sur-Oise, I had the realization that Vincent Van Gogh’s paintings were created by a real, breathing person, and his story took on a new dimension. 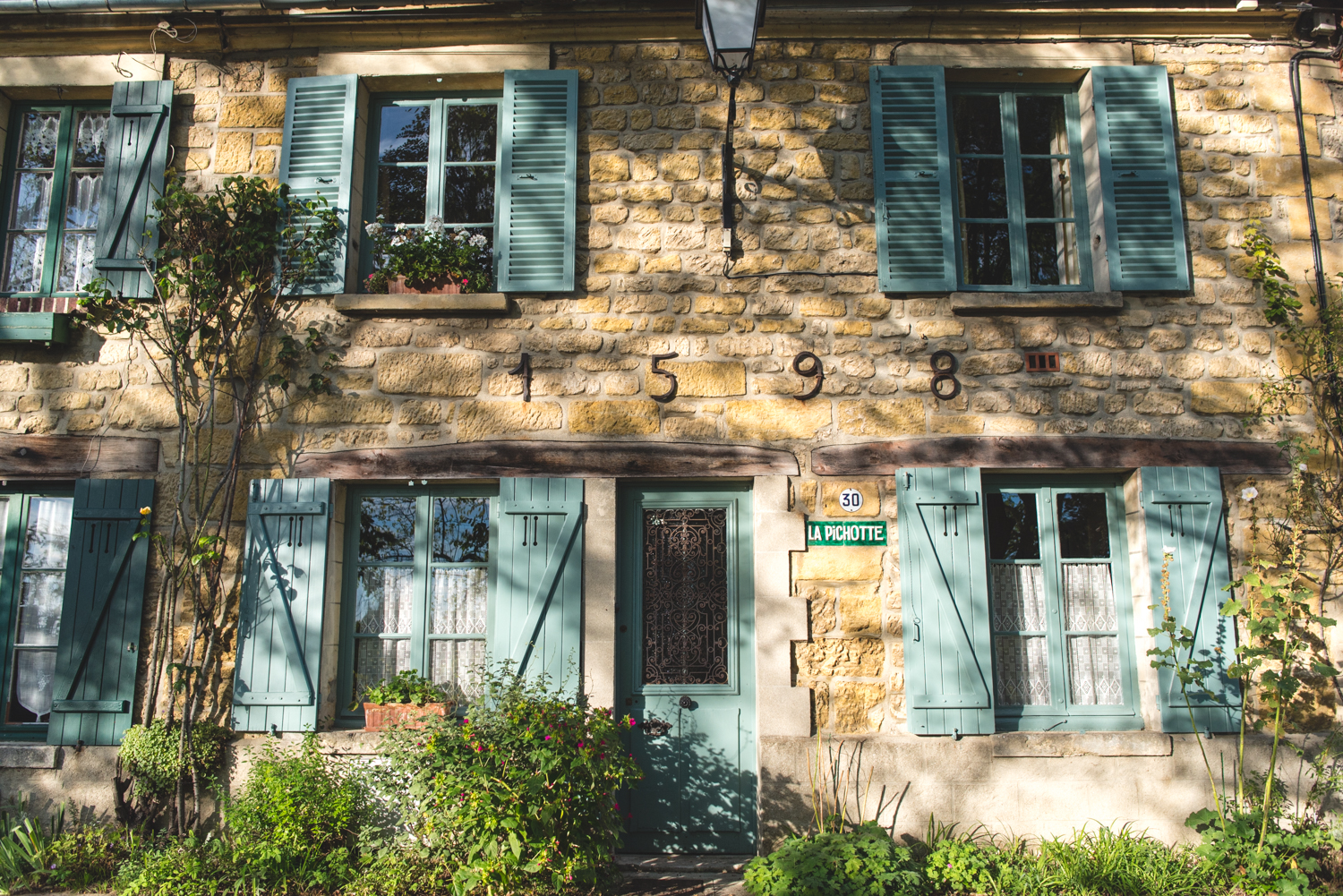 This is the version of Vincent Van Gogh that I think most people know: Painter with a style ahead of his time, cut off his own ear, committed suicide, the end. He has grown to become a legend, something both less and more than what he really was. The “myth” of Van Gogh tends to erase some of his humanity, but it also builds up his life story to monumental proportions. He is the original suffering artist, a trope that artists today still get caught up in. Some artists sadly think that the only way to create true art is through suffering and emotional turmoil. While art (and music) can certainly be more powerful when inspired by tragic events, it doesn’t mean great art can’t be created by a generally happy, mentally stable artist.

The truth is, none of us should strive to live a life like Van Gogh. It was a hard, sad, heartbreaking life story that left me feeling a tiny bit teary-eyed. He had a family history of mental illness, and it seemed like he got the brunt of the “bad” genes. Although it is hard to determine his exact diagnosis, experts think he suffered from anxiety, depression, bipolar disorder, epilepsy, and other physical ailments that caused chronic pain. He stayed for some time in at least two separate mental hospitals, and he moved around to different places almost constantly, living in more than 20 cities in 4 countries. He had a tumultuous existence to say the least.

Van Gogh has always been one of my favorite artists. There is really nobody else like him in the history of art. Sure, you have Cèzanne and Gauguin in the same Post-Impressionist category, but they really don’t even come close to the characteristic style of Van Gogh.

I was excited to find out that one of Van Gogh’s paintings that I am most familiar with was painted right there in Auvers-sur-Oise: The Church at Auvers. I knew the painting first from studying it at University, but it was also featured prominently in an extremely popular episode of Doctor Who.

At the end of the episode, Van Gogh himself is transported to the future to see a retrospective of his own work, and he gets to overhear one of the museum guides say this:

“…to me Van Gogh is the finest painter of them all …He transformed the pain of his tormented life into ecstatic beauty. Pain is easy to portray, but to use your passion and pain to portray the ecstasy and joy and magnificence of our world, no one had ever done it before. Perhaps no one ever will again. To my mind, that strange, wild man who roamed the fields of Provence was not only the world’s greatest artist, but also one of the greatest men who ever lived.”

I’d like to think that if the real-life Van Gogh somehow found out that his paintings would become wildly popular throughout the world after his death, then maybe he wouldn’t have had the same sad end.

Van Gogh spent his last few months in a tiny attic room that he rented from the Auberge Ravoux, an inn in Auvers-sur-Oise, and we were able to visit this tiny room. You are only able to visit with a guide, who told us lots of details about Van Gogh’s time there.

He was there for about 70 days, and painted about 80 paintings during that time, making it his most prolific artistic phase ever. In fact, the painting of the Auvers Church was completed in only 2 hours. He stayed outdoors from sunrise to sunset, only returning to his room to sleep. Part of this was due to the intense heat – it was not only the height of summer, but his room was unfortunately situated right above the kitchens, and the only source of ventilation was a tiny window in the roof. You can see all the paintings he created during this time by clicking here.

One day, instead of returning to the inn like normal, he came back with a bullet in his chest, and a couple days later, he died. They don’t know exactly what triggered his ultimate decision to commit suicide, but they do have clues that he had a falling out with both his friend, Dr. Gachet (who lived in the same town) and his brother, Théo, around the same time. It could be that being estranged from these two friends, his only real support system, is what drove him over the edge.

Van Gogh is buried in the local cemetery next to Théo, who died shortly after his brother of Syphilis. Théo was initially buried near Utrecht in the Netherlands, but was exhumed and re-buried next to his brother. He was one of Vincent’s only true supports, since the rest of his family didn’t want much to do with him. 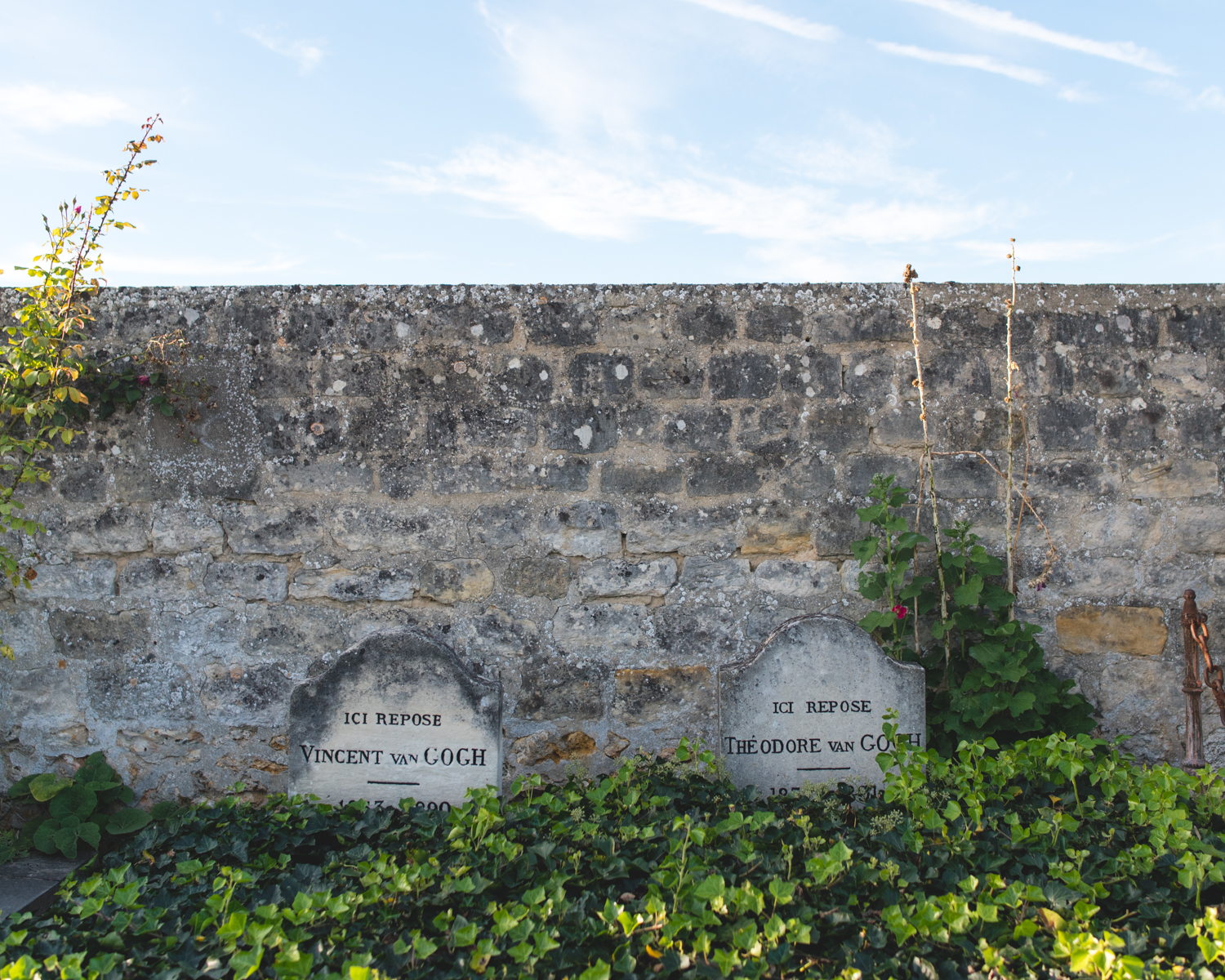 The cemetery is right in the middle of sprawling farmland, with gently rolling hills. It seems like the perfect eternal setting for Van Gogh, since it echoes so many of his rural landscapes. In fact, most of the paintings he completed in his last month of life (July 1890) depicted wheat fields.

The town itself was charming, like most French villages in the countryside. There is also an Absinthe museum, but it was closed the day we went. We could have also gone to visit Dr. Gachet’s house, but we didn’t have enough time. If you’d like to visit Auvers-sur-Oise yourself, you must first go to Pontoise station via the RER C, train line H from Gare du Nord, OR train line J from Saint Lazare. Then, take line H in the direction of Gare de Creil and get off at Auvers-sur-Oise. It’s a little bit complicated, because there’s not a completely direct train, but totally do-able! It took us a while to get there because we came all the way from Versailles.