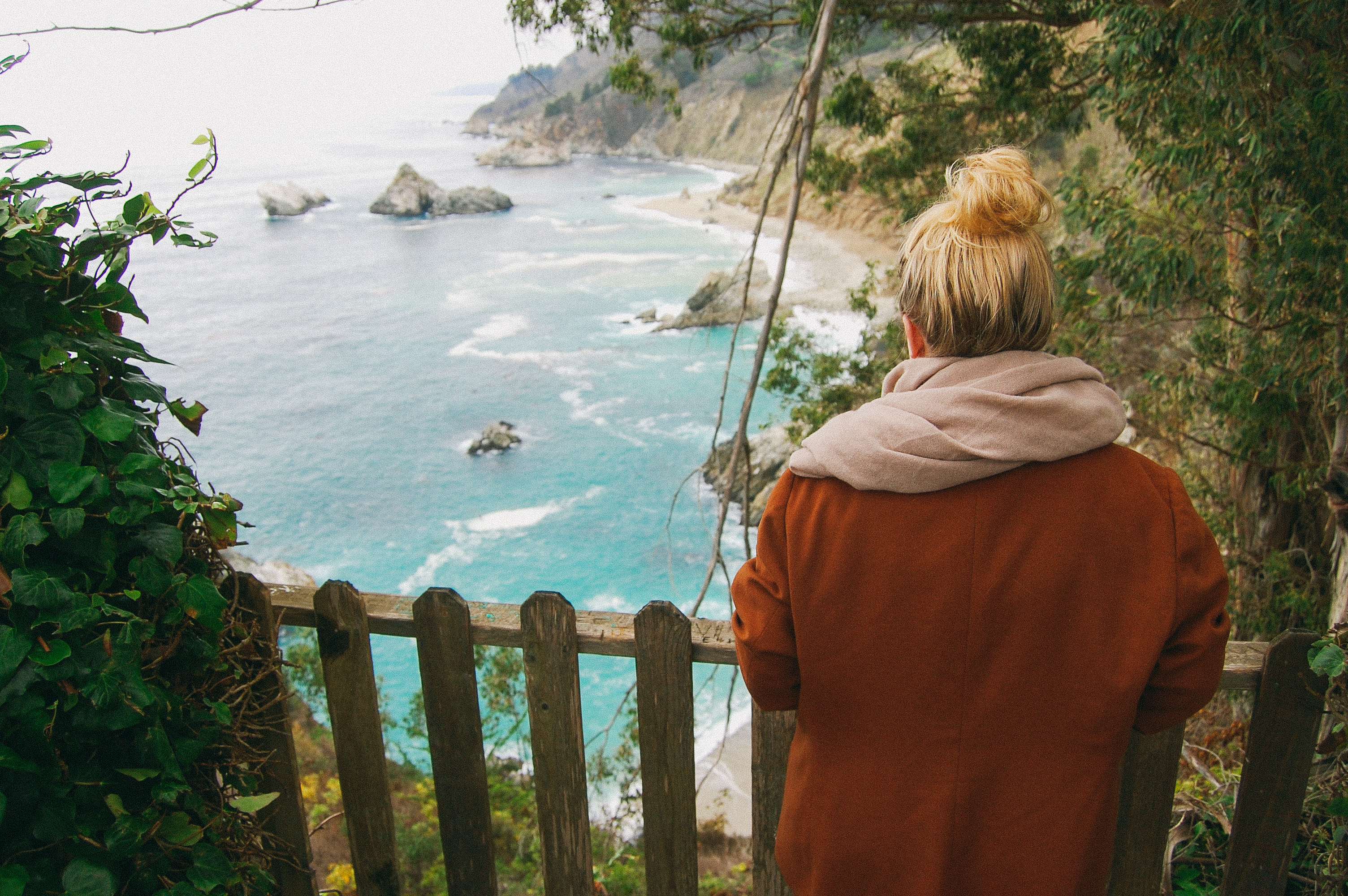 Last week Erik and I took Highway 1 – a short road trip to San Francisco. Pacific Coast Highway is the road that hugs the pacific ocean, dangerously close at some points. It provides amazing views along the way though, and the curves in the road force you to slow down both literally and mentally.

We stopped in Big Sur, the Overlook Trail of Julia Pfeiffer Burns State Park to be exact. It wasn’t so much of a hike, more of just a pathway to a lookout point. If we had more time, we probably would have done a proper hike, but this view was amazing regardless. That water was incredibly turquoise, which is really unusual for the Pacific ocean, at least for the beaches near LA. I’m used to the water looking a dark murky green. One of my favourite things about this region are the eucalyptus trees. As we were walking we could smell them: a tinge of herbal freshness that always makes me feel nostalgic. Whenever I smell eucalyptus I think of that cool, cloudy, marine climate, the dampness of the ocean air giving my hair a natural, wild curl. It makes me think of campfires and clam chowder, cinnamon rolls and sunsets. We stayed in a charming cabin in the small town of Cambria, which felt more like a mountain town even though it’s right next to the sea. The downtown area was so quaint and charming, totally made me think of Gilmore Girls even though their town is somewhere on the opposite side of the country. Then it was time for San Francisco – a city of fog and steep hills. A city that has the culture and variety of a European capitol, yet the casual vibe of a California beach town. Atop every hill is a picturesque view full of color and variety. You can be whoever you want to be in San Francisco. You can paint your house bright pink if you want to, you can go to Dolores Park and have a weed cookie if you like, and you can wear whatever kind of weird clothing you desire (even knitted bell-bottoms). One of my favourite things to do in SF is the Musée Mécanique on Fisherman’s Wharf. It’s got this amazing collection of vintage arcade games and attractions. Self-playing pianos, film photo booths, air hockey, even old fashioned dime peep-shows. After that, we popped into one of the seafood restaurants next door for some clam chowder and California fish n’ chips. We stayed in a studio apartment near Lands End and took busses around the city. I was terrified to drive my manual car up those intense hills so I left it parked. We had originally only planned on one day in the city, but thanks to a pleasant turn of events, we were able to stay an extra night and spend nearly a full day with one of my good old friends. We didn’t have any strict plans for sightseeing, since we knew we’d be back in the future. I always feel like SF is a place I could see myself living, and after this trip my feelings about that are only more decided. We also walked through the Japanese Tea Garden in Golden Gate Park. So beautiful there. Now it’s back to life in France! I feel completely refreshed and ready to start anew, not to be so reclusive in the apartment and negative in my thinking. I honestly don’t know how much longer I’ll be living in France, so I want to really make the most of it before I have to leave. It would be awful if years later I felt like I didn’t appreciate living in Europe while I had the chance.  I’ll be working on being more positive in 2015! More on that in a later post.