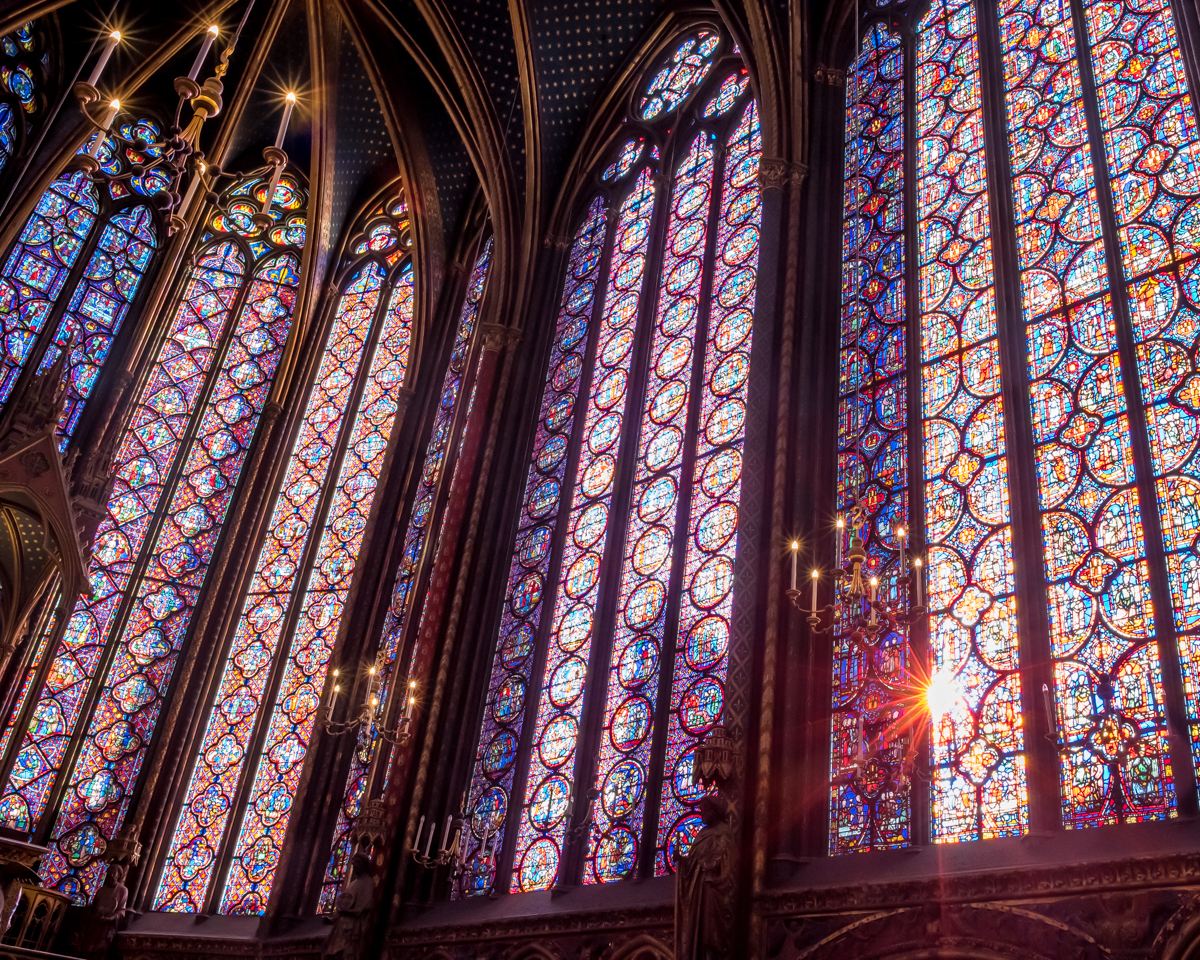 I’ve had the chance to visit lots of Gothic cathedrals in Europe while I lived in France, and one thing that always fascinated me was the light inside of them. It’s elusive and fleeting, but always beautiful because of its rarity, so I thought it was time I dedicate an entire blog post to it.

But before we get into that, I thought this would be a somewhat appropriate time to talk about my views on religion. I haven’t publicly spoken about it before – as far as I can remember – and I don’t often discuss it in-person. But today, I’m putting it all out there! If religious discussion doesn’t interest you, however, just start reading at the line break further down.

In my youth, I was a proper church-attending girl. I clung strongly to Christian values and tried my best to maintain a “personal relationship” with God. I sung worship songs in chruch, I was baptized when I was 15 or 16, I believed that sex before marriage was wrong, and that Jesus died for our sins… I was the typical American Christian.

At some point during college, however, I started realizing how many different religions, world-views, and ways of life there are, how things weren’t always how they are now, and how our idea of “normal” could be considered completely outrageous to people in other parts of the world. I realized that “normal” is only what you make of it – just like society’s standards of beauty or the idea that pink is for girls and blue is for boys – and that it’s all arbitrary. At the same time, I started questioning the validity of Christianity. How could I ever prove to myself that everything the Bible said is real? How could I be sure that the feelings of emotion and devotion I had felt in the past were sent directly from God, or just the simple biological process of my own nervous system responding to beautifully-sung songs or well-spoken sermons? How could I base my entire life around something that could be false? There’s no way that I could ever know for sure if it was true, and I felt like my emotional reactions weren’t reliable and had nothing to do with the truth, so long story short: I stopped attending church and spent the next few years grappling with the fact that I knew nothing, and would probably never know anything – just like Jon Snow.

And let me tell you – it was terrifying. I had lived almost my entire life up until then with a backup support system, with the comforting concept of an almighty God watching out for me, with the knowledge of what happens to me when I die, and then, all of that was ripped away. I had more than one nervous breakdown because of this sudden loss of foundation (I apologize to a certain ex-boyfriend who had to listen to me sob through the telephone), but I couldn’t go back. If I went back, I’d have to accept following something blindly (although some would word that “through faith alone” instead). Yes, there are benefits to living the Christian lifestyle – deeper meaning, self-improvement, community – but the benefits of Church alone do not constitute faith. I wasn’t ready to depend purely on faith, and I’m still not. People all around the world, Mormons, Buddhists, Muslims, and Christians alike, believe largely through faith. They all believe that their religion is the true religion, even though they all contradict one another. How can all of them be true at once? I don’t think they can, so who am I to claim that I know the real truth, when so many other possibilities of truth exist? I am a less-than-miniscule speck of dust in an infinite universe – who am I to claim I understand the basic workings of it all?

So – that’s where I stand on religion. I harbor no ill feelings or disrespect for anyone who practices any set of beliefs, as long as they’re not harming others. I’m happy that it gives many people’s lives a deeper meaning and pushes them to be better people. I just personally can’t label myself with a religion, because there are too many unknowns.

But, despite my rocky falling-out with “religion,” I am still enamored with the light inside cathedrals.

I love the way it represents some kind of heavenly presence filling the expansive architecture, and just like face-to-face encounters with the divine, it’s rare to come by, especially in rainy, gray European cities. Most Gothic cathedrals are generally very dark, traditionally only lit by candles, and that pairs perfectly with the mystical mood that envelops every single vault and chapel. But when the sun is positioned just right, and you’re standing at the perfect angle, it’s amazing how the interior transforms.

In fact, I love Gothic architecture in general. I mean, Notre Dame in Paris was built almost 9 CENTURIES ago! That’s insane. I have walked into a building that was built by the hands of people 850 years ago, and it’s still standing. No modern technology, just hands and some crude pulley systems. And the ornate detail of these buildings doesn’t even come close to the architecture of today. Sure, the engineering expertise of modern architects is to be applauded, but nobody takes the time these days to sculpt gargoyles, The Last Judgement scenes over entryways, or frilly decoration on the rooflines.

Hands down, the best cathedral light you’ll find in any Gothic-era cathedral is at Sainte-Chapelle in Paris. The walls are MADE of stained glass. The moment you surface from the tiny spiral staircase and enter the room, you have this indescribable feeling of awe – and that’s coming from someone who has no faith. I can’t explain it. You just have to go see it for yourself. Even after visiting it probably a dozen times, it still leaves me speechless.

When I first studied the history of Gothic/Medieval art, I was told that the scenes on stained glass windows were there to teach the masses bible stories, but I have a hard time believing that anyone could actually make out the details in these windows. I mean, some of them are so high up that you’d need a telescope to see any narrative detail at all. I say let’s throw this explanation out the window (lol) and chalk it up to a display of wealth and and power. Cathedrals were made to honor God, and many even believe that his Spirit actually dwells there, so the buildings had to be magnificent. They had to get as close to the adjective “heavenly” as they could, which is part of the reason why Gothic architecture gets taller and more ornate as the timeline goes on.

Christianity was the crux of most people’s lives during this time, and just so happened to also be a wonderful tool for order and control of the masses. No other building – besides perhaps royal palaces – were this over-the-top. It would have been the only example of beautiful architecture the common folk would ever see in their lifetime. All other buildings were mere mud-huts in comparison: homes where entire famlies would share a single bed, situated in narrow streets where dumping chamber pots into sidewalks was the norm. When you imagine that kind of existence, it’s easy to see how the Church represented so much more than just an optional set of beliefs. It was a direct manifestation of God’s (and the Church’s) absolute power. Underscoring this power was the fact that Cathedrals were the tallest buildings in any city of Medieval Europe – it would be the first thing you’d see as you approach and the last thing you’d see when you depart. This was no coincidence. The towering steeple and incessantly clanging bell chimes would be a constant reminder that God is always watching.

I think this history is part of the reason I’m so fascinated by cathedral light – The way that these incredible buildings were designed is evidence of man’s never-ending quest to comprehend the Divine, and whether you believe it’s just bright sunlight, or a heavenly representation of God, you can’t deny that it’s beautiful.