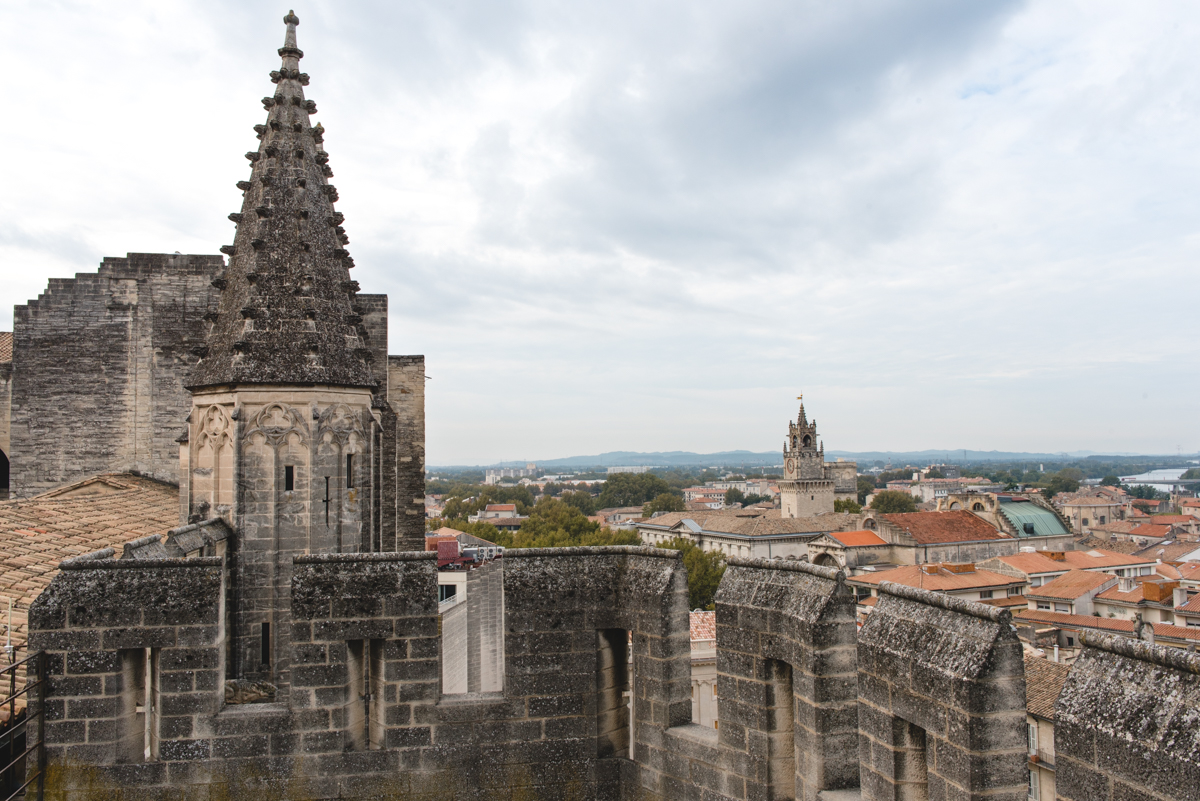 For a while I’d been considering the idea of traveling alone. I’ve read many articles about females safely exploring the world solo, and I don’t think there’s any reason why a woman shouldn’t be able to go places by herself, just like a man would. The majority of travel destinations are completely safe and you won’t be seen as a target just because you’re a lady – In fact, my friend who visited me for a week was shocked that she didn’t get a single cat-call or lewd glance when she went for a morning jog in Paris, because stuff like that happens to her regularly when she goes for jogs through her city in Southern California.

I was never nervous about safety when it came to traveling alone, and I never felt like my gender was barring me from having awesome travel experiences, but I suppose what kept me from doing it was the fear that I’d get stranded, lost, or my bank card would suddenly stop working and I’d have no money. But those are all things that you can take steps to prevent. 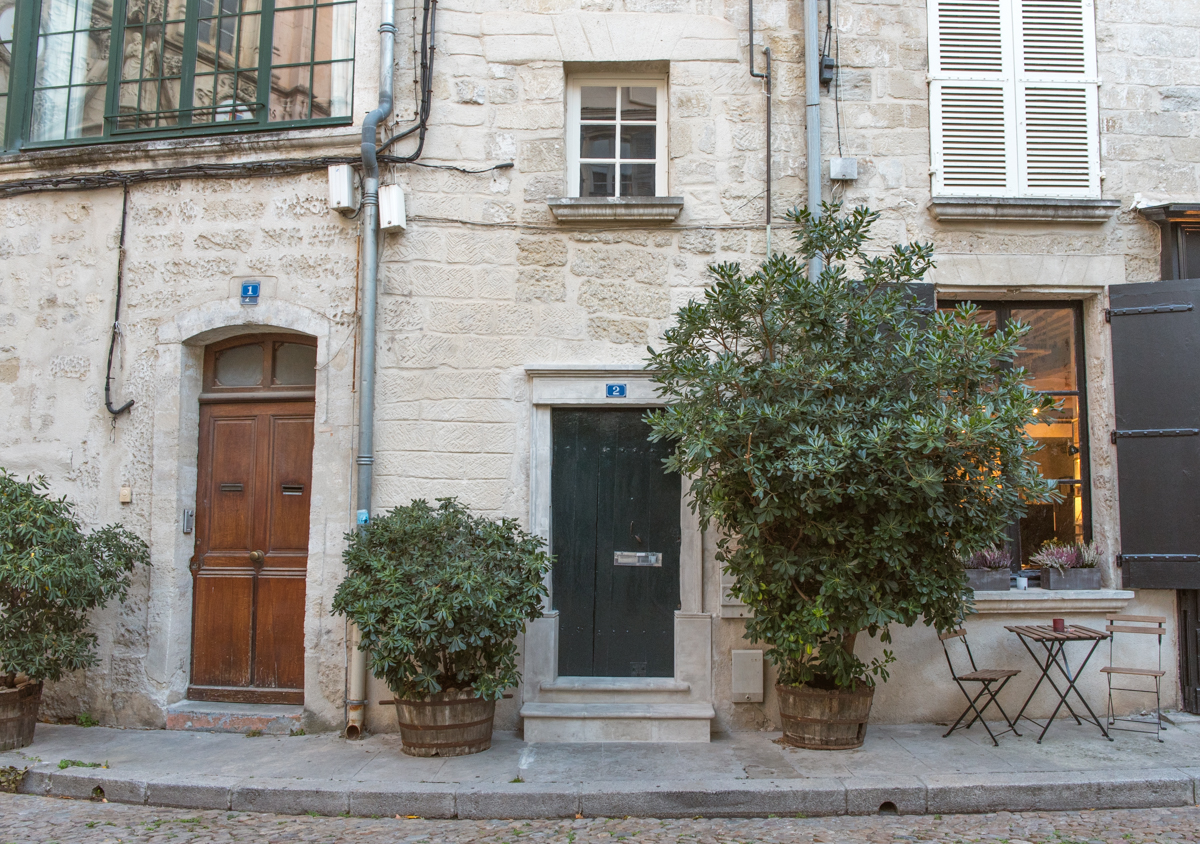 Side note: Techincally my first travel-alone experience happened when I studied abroad in Paris for one semester, but I was coming into an exchange program with a support office at my disposal, so I don’t really count that as typical “travel.”

When Erik went to the US for 2 months starting in October, I felt like it was the perfect opportunity for me to do some solo traveling. I originally wanted to do a grand 3-week adventure through the south of France and Italy, but that just seemed too daunting with the impending move approaching quickly, so I opted for something super simple and easy – a weekend getaway to Avignon in the South of France. 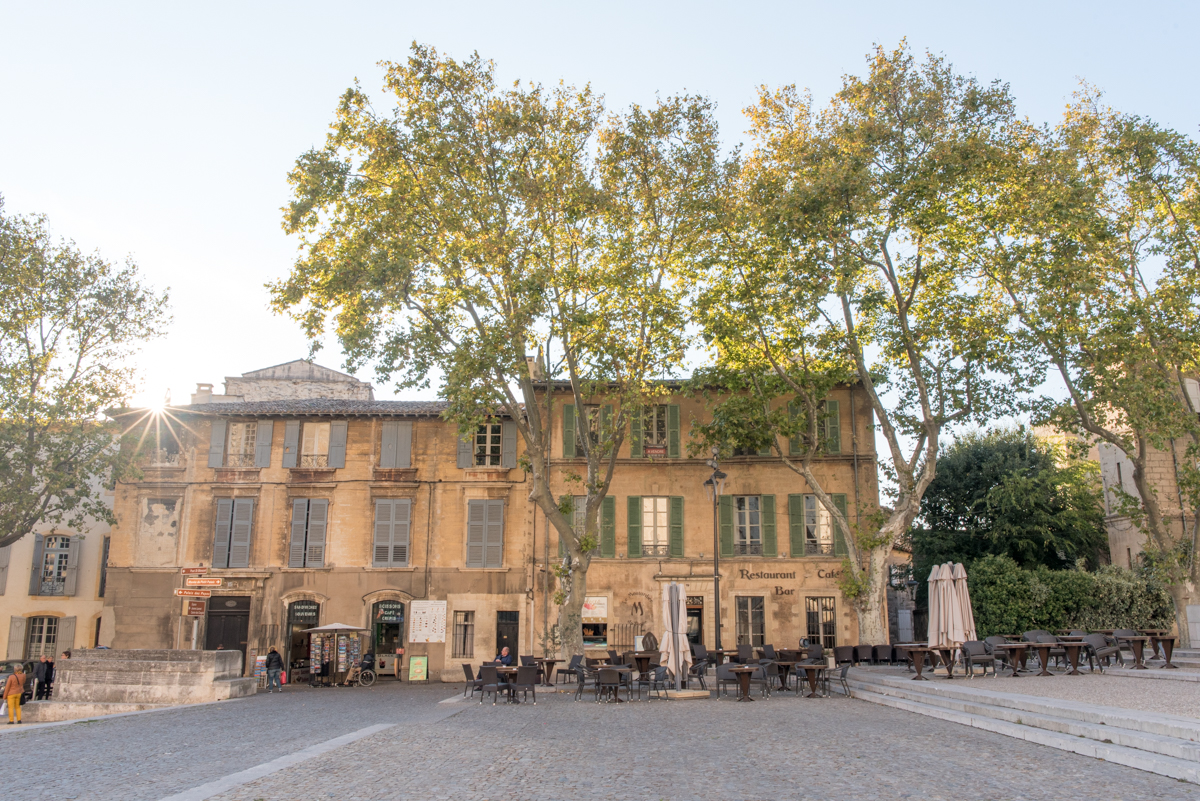 I made sure to pack my backup debit card and checkbook, as well as some cash so that I would never get stuck anywhere without money. I booked a tiny private room at Pop Hostel because I preferred the privacy, and I found cheap train tickets through Ouigo. I think it was the perfect first solo trip to take, because it was short, not too far away, and the city of Avignon itself is not very large. 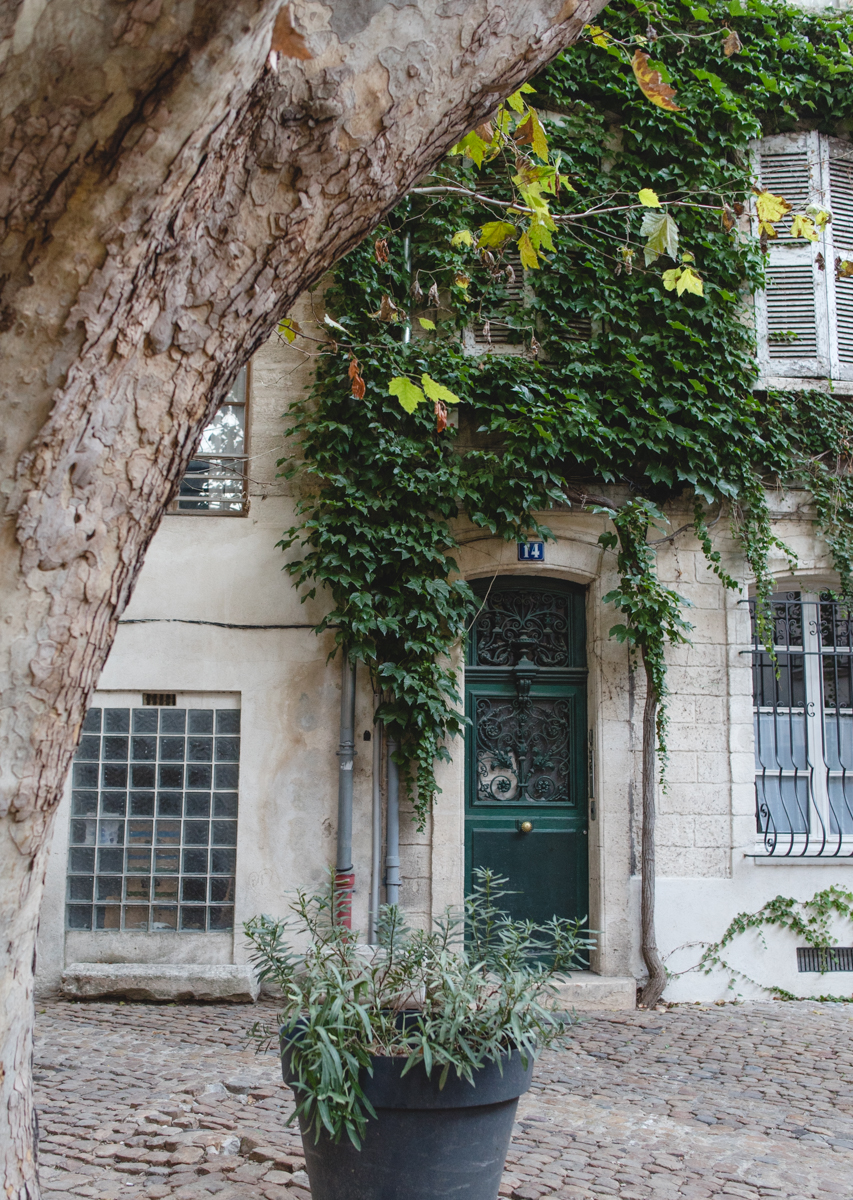 I think some people, especially Americans, get so inspired to travel that they start planning the most intense Eurotrip ever: a month or two long, 20 cities in the itinerary, living out of a backpack, etc. But honestly, I think for a first trip abroad, that’s a big mistake. Just like everything in life, you should start out slow. You’re going to be dealing with a lot of issues, and adding more places to your itinerary only increases the amount of mishaps and confusing situations you’ll have. Why put yourself in that situation? Maybe this isn’t true for everyone, but I think you’ll get so much more out of solo travel if you take it easy, don’t stress yourself out, and spend more quality, focused time with fewer destinations.

Didn’t you get lonely?

I think the biggest thing people worry about when it comes to solo travel is the loneliness factor. I’ve always been kind of a lone wolf, so having the freedom to do whatever I want, whenever I want, is more important for me than having someone to talk to. Yes, eating out at restaurants was sometimes a wee bit awkward, but I think it’s healthy to do things on your own every now and then. It makes you realize how much you’re actually capable of, it makes you feel strong and independent, it allows you time to really reflect on yourself without the distraction of conversation.

What is there to do in Avignon?

Avignon used to be where the popes lived, so there’s a huge papal palace here – it’s the main attraction. There’s also cute winding alleyways, churches, some museums, and an old bridge. It’s a very medieval city, cobblestones and rough stone covering almost every surface. But I think the best part about Avignon is its proximity to the villages of Provence. 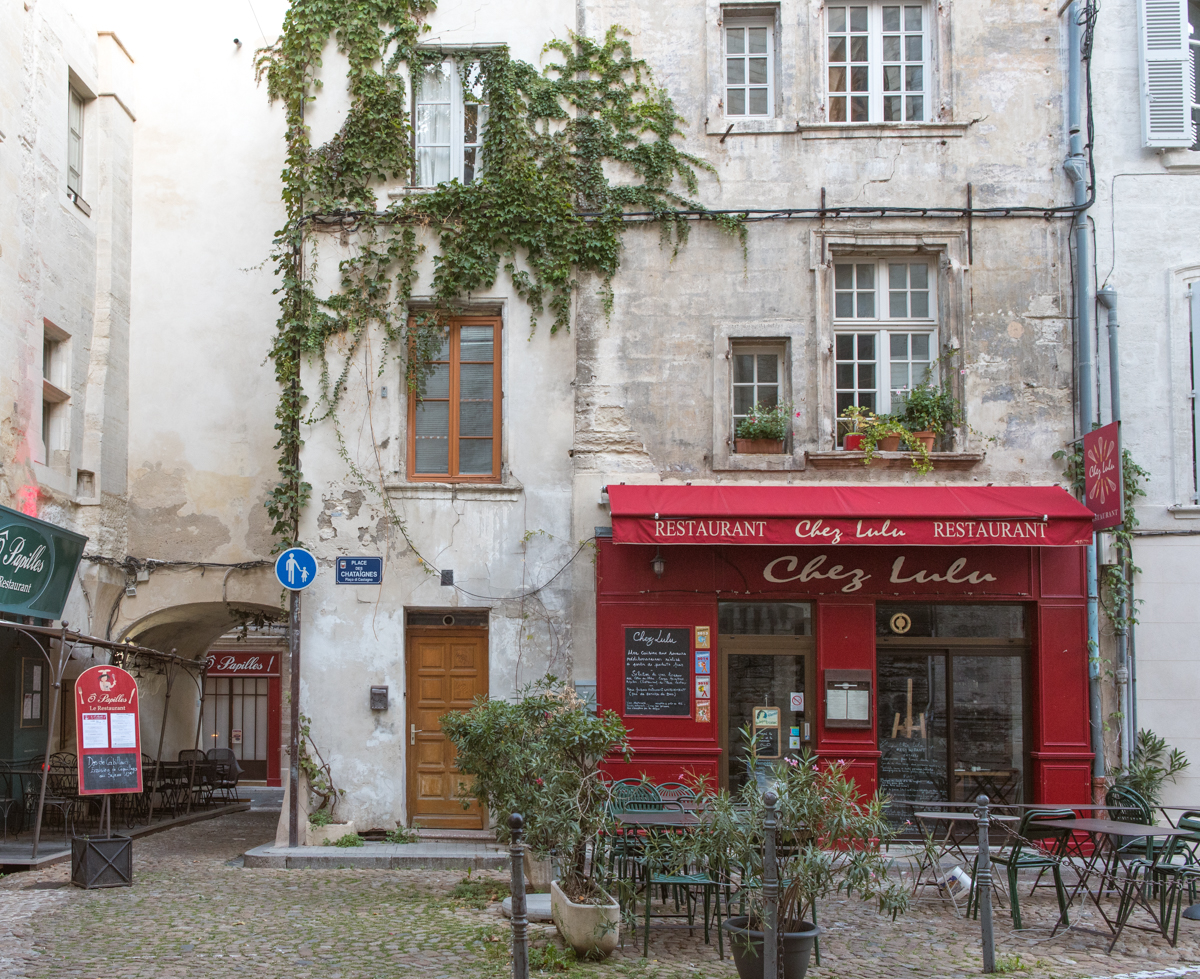 I wanted to see some of these villages, but I didn’t have much time and I didn’t want to rent a car, so I went for the next best thing: a guided tour. I booked a mini-van tour that took me to the Lavender Museum, Rousillon and Gordes (blog post coming on Gordes soon). Unfortunately, the Lavender was out of season, so I didn’t get to see rolling purple hills of fragrant bushes, but I picked up some fine lavender essential oil from the gift shop at the museum. My favorite stop of the day was Roussillon, a red village perched on a hill. The colors were incredible. See the blog post from Roussillon here.

I visited the Palais des Papes bright and early, the moment they opened, so I pretty much had the place to myself. My favorite part was climbing up to the roof and looking out over the city. I set my camera on the top of the stone wall and captured myself on the rooftop tower using the self-timer on my camera. 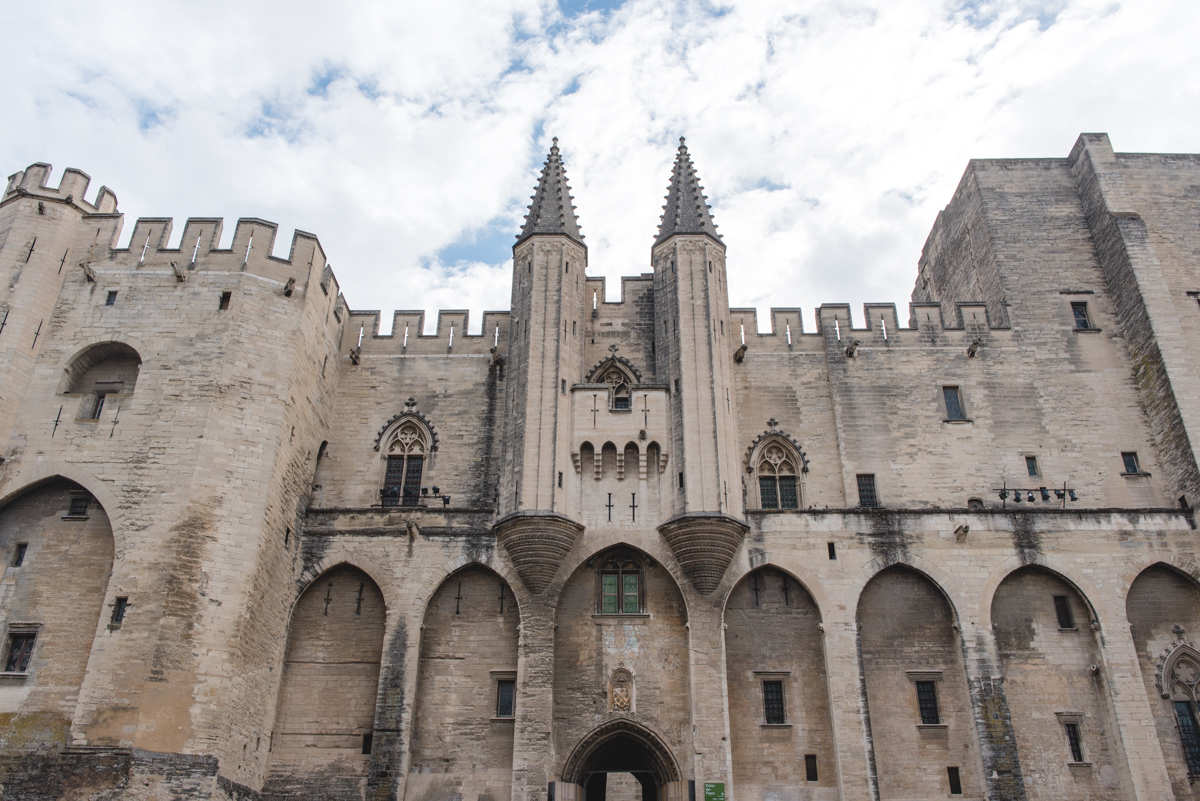 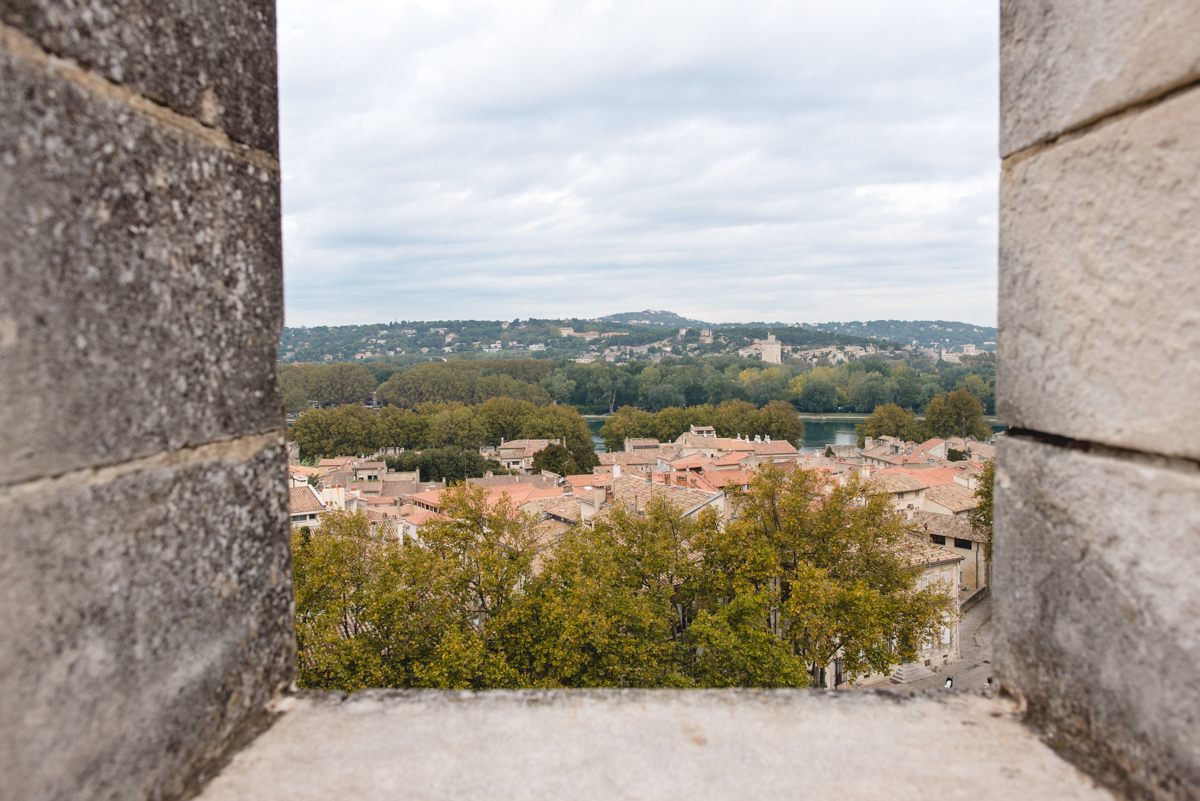 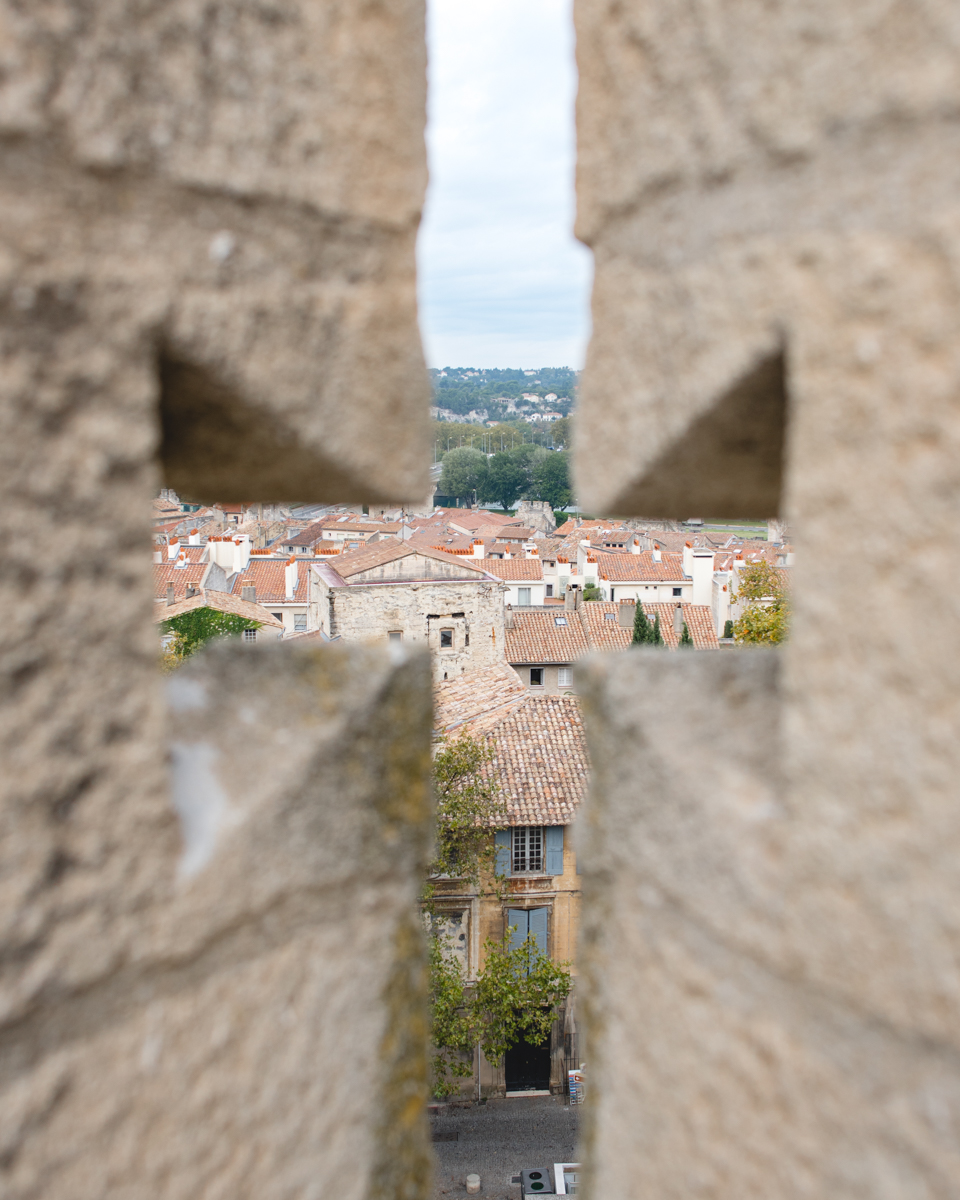 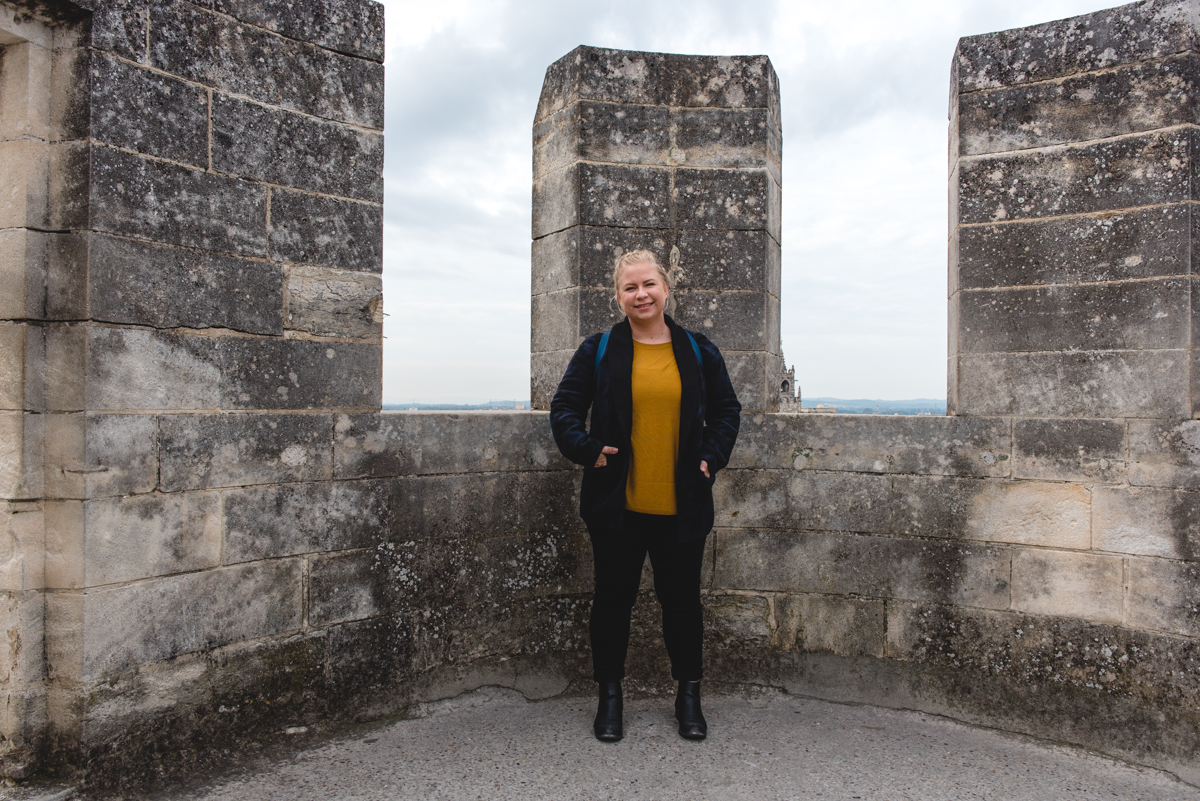 I really loved the windows inside the Pope’s palace, almost all of which had stone window seats built-in. I’m a sucker for moody window light. Whenever I get the chance to explore an old building with few other people around, I like to pretend that I’m an archeologist or Indiana Jones type explorer who’s just discovered an abandoned castle in a lost civilization. This massive fortress really fueled that daydream. 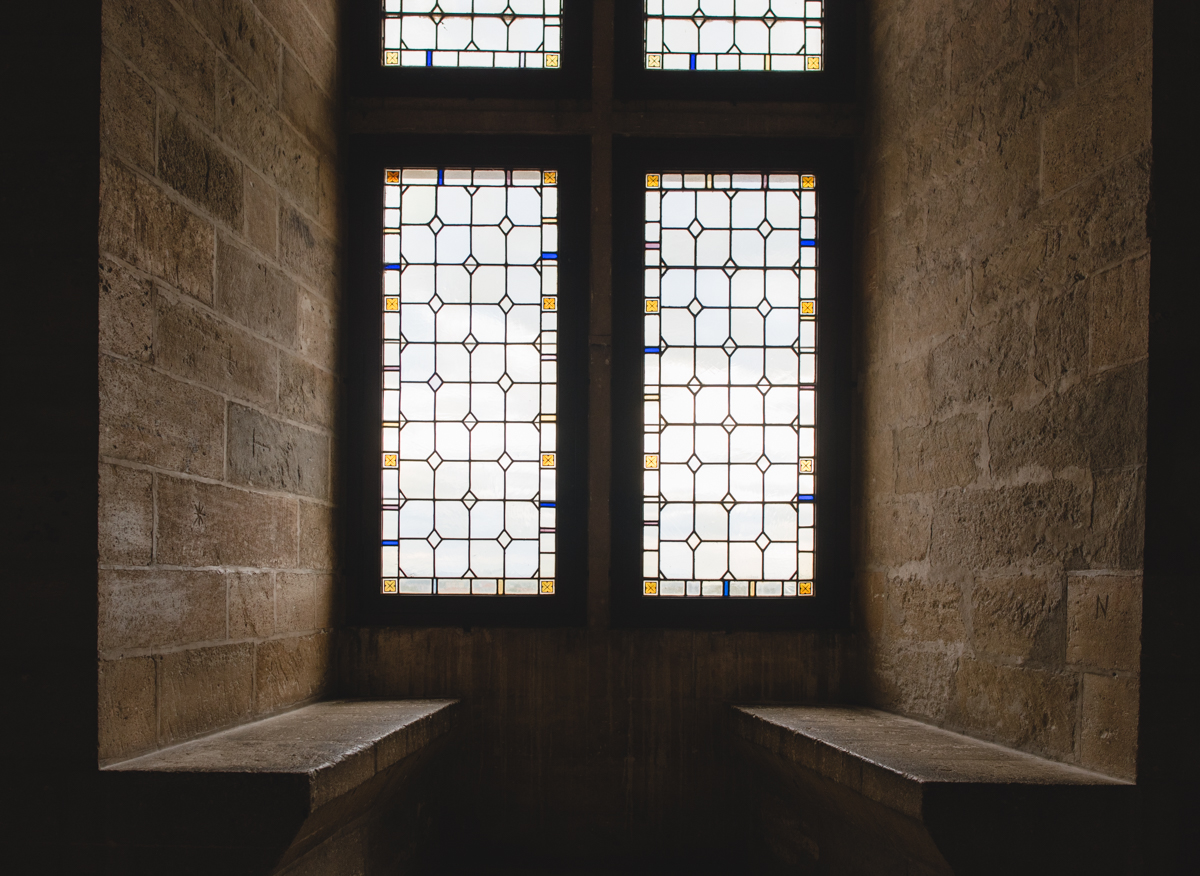 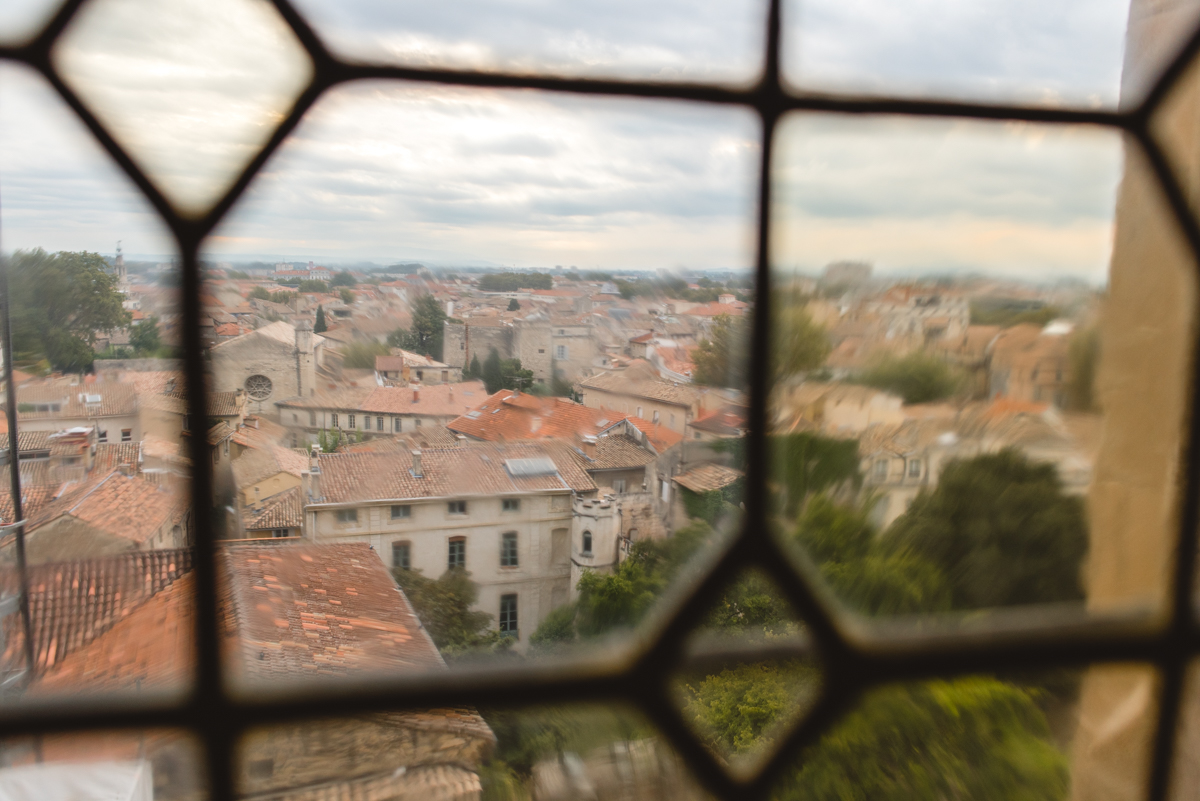 Would I recommend Solo Travel?

Without a doubt, yes! But here’s my advice: if you haven’t traveled much before and you’re nervous, take your time to do a lot of research, and don’t commit to too much at once. Use the internet to look up things like a city map, how to use the public transport system and which types of tickets to buy, how to get from the airport or train station to your hotel/hostel, and look up opening times of the things you want to see the most. I know that in Paris, all the museums have at least one day where they’re closed, usually on a Monday or Tuesday, and you wouldn’t want to miss out on your favorite places just because you forgot to look up the hours. For me, having all this prior knowledge puts my mind at ease so that I can feel free to enjoy myself, but I know that some people prefer to figure everything out spontaneously.

Whatever your travel style is, don’t be afraid to get out there and see the world by yourself, because sometimes we can’t wait around for other people to join us, and I guarantee you’ll become a stronger person because of it.