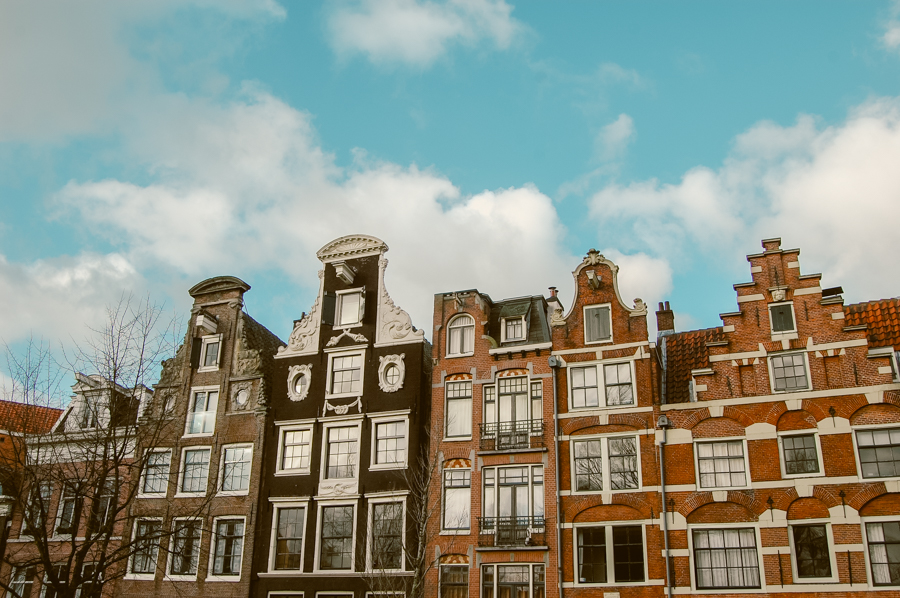 What better way to kick off the new year than travel to an undiscovered place? One of my goals for 2015 is to travel more around Europe, to discover it while I can, while I live so close to it all. Amsterdam was a spur of the moment trip, booked 1 month before, and it was exactly what I needed.

The first thing that struck me was how easy it was. I’m so accustomed to international trips being a huge production, very expensive, involving long plane rides, annoying layovers, and credit cards that may stop working at any moment. Living in the US, most people are so far removed from foreign countries that when the time to travel comes, one must uproot themselves and plan, plan, plan. Going from central Paris to central Amsterdam, on the other hand, was a breeze. A few hours on a comfortable train and you’re there. The city tram system was the easiest system I’ve ever used, and it helps that Amsterdam is quite small, or at least smaller than I expected. It’s really invigorating to discover a new place and find out which of your expectations it invalidates.

For instance, I thought France had some pretty precarious stairs, but they’re nothing compared to the Dutch style. Many of them were less like stairs and more like a ladder – upon descending, you either have to go down backwards or turn your ankles in peculiar angles. Another thing I noticed was the ubiquitousness of the open-faced sandwich. Thick-cut, hard-crusted bread topped in a variety of different ingredients. I had one that was tomato-mozarella themed, another that had hoisin sauce, ham, and super thin “pickled cucumbers.”

I’ve read that the Dutch are very open people, which would explain the decriminalisation of drugs and sex work, and I found that to be true of their demeanour as well.  Every person we encountered was helpful and informative and nearly all of them spoke perfect English. Perhaps the abundance of windows has something to do with this openness of character. Every single building was covered top-to-toe in windows. most of the time, even the ground floor window shades were pulled back, so that any street dweller like myself can see right in. I saw people sitting in their own living rooms and people making dinner in their own little kitchens. I even saw a dentist working on a patient! Right there at street level, I was permitted to see directly into the office of a medical professional while at work… is it just me or is that astounding? I’m so used to a higher level of privacy. Amsterdam felt so comfortable to me. Maybe it was the smaller scale, the fact that Dutch sounds a bit like English, or the warmer colours of the architecture. Most of the buildings and even the streets were constructed with brick. I could totally see myself living in Amsterdam, not that that’s gonna happen anytime soon or ever, but still, sometimes it’s nice to imagine what it would be like living in different places. I would have to say the best experience we had in Amsterdam was visiting Anne Frank’s house. I absolutely loved the entire experience and if you go to this city, I must insist you visit Anne’s secret annexe. What I loved most was that almost the entire museum was narrated by Anne herself, or her family, not by an impersonal, educational, faceless voice that dictated how you should think or feel. Quotes from her diary were on every wall.

I almost never buy things in museum gift shops (apart from postcards), but I immediately grabbed a copy of Anne’s diary as soon as I saw it. I read about half of it on the train ride back to Paris and I’m loving it so far. I’m literally reading someone’s personal diary, and despite the fact that it was written so long ago and that I’m not hiding out from Nazis right now, I can relate to so many things she writes about. I consider this to be one of the highlights of my life, to be honest.

Other than that, we had some great meals in interesting restaurants, learned about tulips at the Tulip museum, and bought some Gouda cheese as well as some fancy chocolate with beautiful packaging. (we may have also eaten a “special” muffin, but I’ll just leave that part to your imagination :p) Here are some of places we visited that we loved – most of them are on the west side of the city, since the place we stayed was on that side.