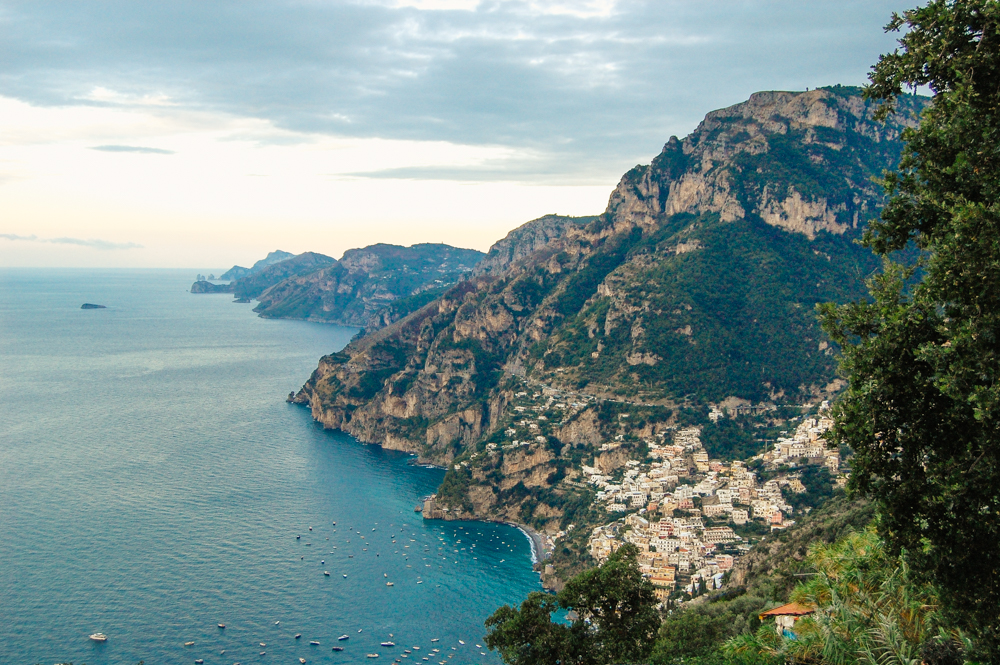 Ok – we arrived at the last bus stop at the top of the mountain and end of the road – we must be here now! – That’s what I was thinking. Turns out, we had to walk down lots of steps, through a handful of old stone alleys, down some more steps, and then – WE FINALLY ARRIVED! We rang the bell at the gate and were greeted by the owners’ young son, who enthusiastically shook our hands and insisted on carrying our bag up the front path. He was probably about 7 years old!

We arrived in Positano in the dark of night, so even though we knew there were amazing views out there, all we could see was darkness. When I woke up early the next morning, I was greeted by this view from our balcony:

The front path was also beautiful, with overgrown flowers, some grapevines, and the distant mountains peeking through the leaves. Every morning, we had breakfast on this terrace. I mean – does it get any better? No. No it doesn’t. We began our first day with a very long walk down the mountain. We followed a long stairway called Via Capella that connects Nocelle with a beach, and it took us about an hour. This seemed like a great idea at the time, but let me tell you, we regretted it later… for the rest of the week in fact! Climbing up steps immediately makes you feel the burn in the thighs, but going down steps sneakily wreaks havoc on every single muscle in your legs, but you won’t know it until the next morning! I was a stiff wooden board for the next 4 days!

Honestly, it was a beautiful walk down the mountain, so despite the soreness, I am glad we did it. There were lots of little villas and houses to peek in at, not to mention the views over the ocean. Erik kept getting overly excited at all the tiny lizards running across our path or over the rocks. The path led us down to Arienzo beach, one that most people reach via water taxi from the main pier. We stopped into the beach cafe for some mojitos, then took the boat over to Positano’s main beach. Coming from California, where the ocean water is murky green-brown and freezing cold, the turquoise blue of the Mediterranean was a revelation. For once, I actually enjoyed floating in the water, something I’ve always disliked. You see, I have a fear of, and great respect for, the ocean. It’s powerful, unstoppable, and terrifyingly deep. Riptides are real, and people die from them, so I never go deep and I will never ever pick up surfing. But here, floating in the shallows (with my knees still touching the pebbles) was peaceful and refreshing. I had never before enjoyed the ocean like that.

However, I do have to say that the pebbles (not sand) on the beach really hurt my weak little feet! So bring plastic flip flops if you’re not accustomed to going barefoot. After a few days of chilling on the beach, we took the ferry to Amalfi to visit my friend, Laura of Ciao Amalfi. She showed us around the town, the main church and took us through some hidden passageways I would have never known were there. In fact, there’s a passage that runs directly underneath the church! We finished the day off with a long coffee break next to the sea. It’s lovely to meet up with people you know while traveling, it makes the foreign location feel much more personal and memorable.

If you’re going to be traveling between cities along the Amalfi coastline, I highly recommend the ferry. It’s so much more pleasant than the crowded SITA busses. The last few days of our trip were spent at a hotel in Positano itself, La Bougainville. It was a really nice hotel, pretty good value for the location. The beds were comfortable and the rooms nice and cool with AC. Unfortunately, however, Erik came down with a nasty cold and was bedridden for about 2 days. I ventured out on my own once or twice either to sit at the beach or take pictures of the town. These next few pictures are from those meandering walks. It seemed like no matter where I was in this town, the view was always spectacular. I think what I’ll remember the most from this trip is waking up to see the sunrise that first morning – that, and the long uncomfortable bus rides up the mountain! I took one photo of this view during sunrise, and one during sunset. Isn’t it amazing how the angle of the sun can change a scene so dramatically? The only way we are able to see the beauty of this world is through light, and I am forever grateful for it.

Keep up with me via one (or all) of the social media icons below!