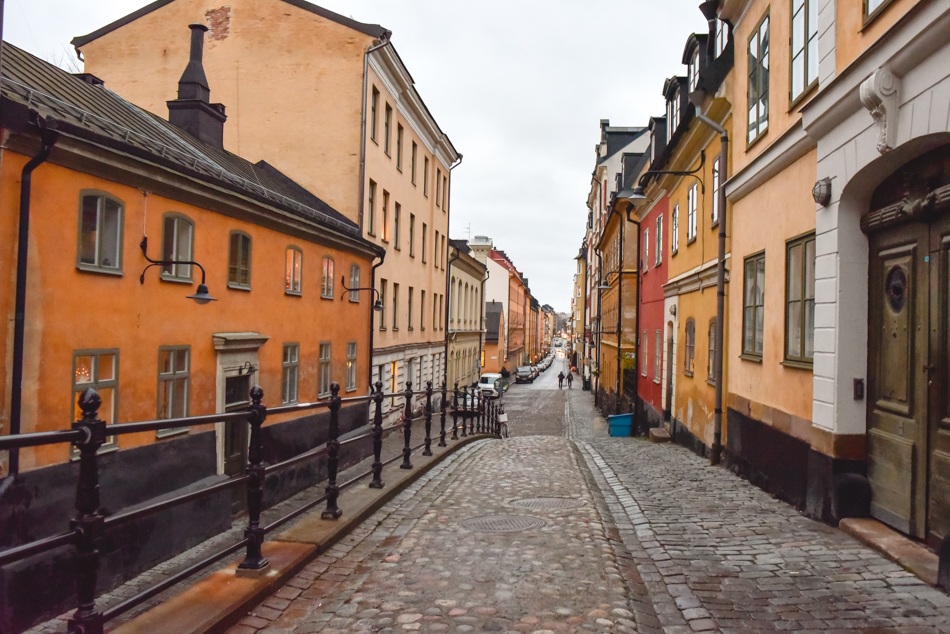 One of the first major things we did was visit Skansen. I was expecting a simple park or natural area, but it was more like a mini-version of what Sweden looked like in the past, like a theme park but not cartoonish. They had barns, other types of old wooden buildings, some windmills, a Scandinavian animal zoo (where I discovered that wolverines may look cute, but they’re terrifyingly vicious!) and most importantly, a Christmas market! I absolutely die over holiday markets, they’re just so cheerful. Plus, you can always get some really good snacks, and I’m ALL about the snacks.

They were selling so many adorable things; wreaths, handmade wooden ornaments, candy, hot mulled drinks, pastries… the list goes on. I bought a couple little ornaments – one of a traditional red Christmas horse, and another of a girl gnome to go with a boy gnome we’ve had for a few years now. We named the gnomes Elizabeth and Olof. It’s a funny story actually: I bought Olof the gnome at a Swedish Christmas market in Paris – 4 years ago. It was one of the first real “dates” Erik and I ever went on! Now we have a pair! When we bought two bottles of mulled wine (called glögg in Swedish), I had assumed that it was real, alcoholic wine. It turns out, Sweden has stricter rules about where you can sell alcohol. Even if a bottle remains sealed and bagged, they aren’t allowed to sell it outdoors at markets. However, despite the fact that it was mulled juice instead of wine, it still tasted like Christmas, which made me happy! We later enjoyed our hot glögg while wrapping christmas presents back at Erik’s sister’s house, which brings me to another point. SWEDES LOVE PRESENTS. I’m not kidding when I say that under the Christmas tree of Erik’s grandmother were about 80 presents. And I thought Americans were materialistic when it came to Christmas! It was a stark contrast to recent years with my immediate family in California – There’s usually only about 6 presents underneath our christmas tree.

On a different day, we explored Old Town Stockholm, known as Gamla Stan to locals. I always love a good old town, in any city. Charming streets, unique architecture and historical monuments sprinkled throughout. I especially loved all the colors: golden yellow, salmon pink, rust orange, and some brick red. If you ask me, that’s a color palette made in heaven. It might be strange to some people, but mere color excites and inspires me! It really paired well with the continually dim daylight of the short winter days. After a short walk through Gamla Stan, we crossed a bridge and chanced upon another Christmas market. This one was next to an outdoor ice rink, although we chose to sit on the sidelines as we ate snacks. Erik’s sister recommended I get a lángos. It’s basically a deep fried circle of dough topped with sour cream, cheese, onions, and a pound of garlic. It was almost the best thing I’ve ever eaten – it was also the most garlic-y thing I’ve ever consumed. According to Google, it’s a Hungarian specialty. After that, I washed it down with some sweet glögg and a few pepparkakor (gingerbread cookies). It’s been a while since I’ve enjoyed food this much. I seem to get the best foods from outdoor markets!

After spending a few days in Stockholm, it was time to take the train up north to see the rest of the family. I was so looking forward to having a white Christmas – something I never got living in Southern California. But two days before we traveled North, there still hadn’t been a good snowfall. I was mentally preparing myself for brown, dead earth. But mother nature must have liked me, because a nice layer of snow appeared just before we arrived! I love how bright the snow makes even the darkest winter days, and the days sure are dark in Sweden. The sun was setting around 2:45 in the afternoon, and wasn’t rising until about 8:45 the next morning. That’s only 6 hours of daylight, and a good portion of those hours are dimmed during sunrise and sunset. I went for a couple walks to soak in the beautiful scenery during those limited day-lit hours. The light was in an almost constant golden hue, since it stayed so low in the sky, and the sunset I saw on our last night in Sweden was unreal. Enjoying Christmas in Sweden was a little bit different than experiencing it in the USA. For starters, Swedes don’t generally bedeck the exterior of their homes with bright strings of lights. Instead, they place a candelabra in the middle of each window. The effect is more subtle, but also more impactful when living in a rural, snowy area. There’s not much light pollution at all, so the window candles are really noticeable when reflected by the white, sparkling snow.

Swedes also really love candles. They love them so much that I even saw a couple in the airport. That would be a “security risk” in America! Almost all of the dinners we shared together were lit only by candles. It was so cozy! It may sound silly but one of my favorite moments was having fika – coffee and sweet snack – after Christmas dinner. loved how the warm candles were flickering and how the tree was sparkling and how lovely the steam was rising from my little coffee cup. I think from now on, when I think of Swedish christmas, I’ll think of the image below – warmth, candlelight and coziness.